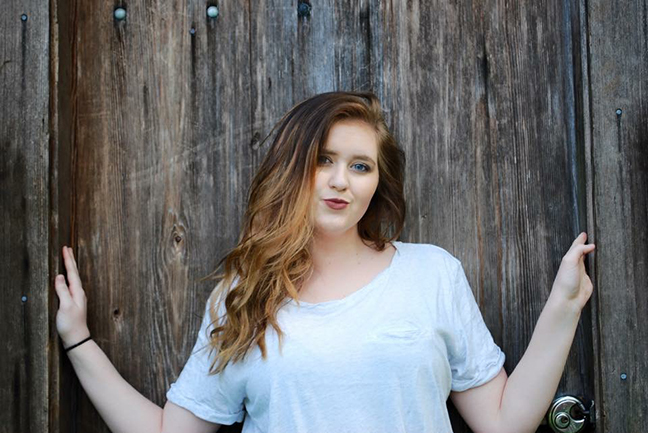 Chloe posing for her senior pictures, about a month before her diagnosis.

Three days before her high school graduation, Chloe Downs was diagnosed with stage four cancer. Downs had already completed two years of college at EvCC and was ready for her future. However, her big plans had to be put on hold.

After realizing her high school courses weren’t challenging enough, Downs entered the Running Start program at EvCC for her junior and senior year. After getting her associate’s degree from EvCC and graduating from high school, she planned on coming back for one more year to finish all her prerequisites and then transfer to a university that offered a Bachelor of Science in Nursing.

During her senior year, the feeling in Down’s leg and foot began to leave. About three months later and countless visits to the doctor’s office and physical therapy, lumps started to appear throughout her body. She was eventually admitted to Seattle Children’s Hospital for a biopsy.

On June 1 of 2016, Downs was diagnosed with Stage IV Rhabdomyosarcoma, a cancer of the soft tissue.

This was the last thing anyone expected. “You’re never prepared to hear the words ‘Your daughter has cancer,’” said her mother Janis Downs. At the time, Downs was 17 and had no family history of cancer.

“I don’t think it hit me right away. I just looked at my parents and saw that they were sobbing and I think that that hurt me more than finding out that it was cancer,” Downs said.

Downs spent the next 42 weeks getting three different types of Chemotherapy, eight weeks of radiation and five different surgeries. She stayed part time down in Seattle at the Ronald McDonald House, a place where people from all around the US can stay in order to get treatment from Seattle Children’s Hospital.

Downs said “I think that my biggest challenge was the fact that I had to miss out on so much. I barely made it to my graduation. I couldn’t go to college and have fun like everyone else, and while everyone was out on dates or hanging out with their boyfriends I was at home, bald and puking in the toilet. I couldn’t go to concerts that I had bought tickets for a year earlier, and I couldn’t go hangout with people because my life revolved around living in Seattle and having doctor appointments.”

What helped Downs get through this experience was the support from her family, friends and community. “My mom was by far my biggest support system. She never left my side and I honestly can say that I don’t think I would have been able to finish my treatment if it wasn’t for her. She is beyond amazing,” Downs said. Also, her younger sister became her best friend and was the best at making her feel better after long days at the hospital.

The community and their church offered a great deal of support. Between fundraisers, Facebook pages, designing t-shirts, making meals, a GoFundMe page and much more, the community showered the Downs family with love.

Today, Downs is finished with her treatment and has only one more surgery until she is officially cancer-free. While she fought this battle, what was most remarkable to the people around her was her positivity.

“Chloe inspired me daily because she never complained about how sick and awful she felt. She never grumbled about going to see the doctor again, and having treatment again, and driving to Seattle again…she just took it all in stride and stayed so strong during the whole process,” said Janis.

What’s next for Downs? She’s taking a trip with her family to Italy and around Greece for her Make-A-Wish and there are a few concerts on her agenda. She wants to come back to school and finish her Bachelor’s Degree at some point, but she’s not sure if she still wants to go into nursing.

Downs’ determination to finish school was just like the determination she had to defeating her cancer. Her outlook throughout her battle was “I thought that I could either let this take me down and take away all of the good things in my life or I could keep my positivity and happiness and just kick its ass. I chose the second one.”