Fast Fashion: What’s It Really Doing to You?

Everyone likes a bargain. Especially when you’re a college student in debt.

But what’s the price you truly have to pay when you’re constantly buying low costing, poor quality clothing items in quantities each week? Sure, that top was only $10. But so was that other top, and that $15 sweater.

Before you know it, you’ll have a closet full of cheap, disposable clothing you don’t even wear, and you’ve just spent as much as your tuition probably costs.

Welcome to the fast fashion trend.

What is fast fashion?

“Fast fashion” is a term used to describe the rapid production of trendy, low costing and poorly made clothing.

You may be familiar with some of these retailers such as H&M, Zara and Forever 21. They’re only three of many contributors of this trend.

“Fast fashion is great. You can look trendy, you can buy those styles a couple weeks after they’re on the runway New York at a lower cost, so obviously that makes that accessible to students,” Ryan Davis, EvCC’s dean and vocational director of business, said.

Most retailers are now able to move new lines of product in and out on a weekly or several week time frame as opposed to a monthly time frame. However, they’re often not designed to last. They’re designed to be disposable and of low cost so consumers don’t feel bad when they throw it out.

So, how are they able to do it?

Large production operations are typically offshored. Global supply chains are now also able to move product more quickly and transcontinentally, making it so that consumers who once shopped for seasonally for items that will last, are now shopping on impulse.

Nowadays, production of clothing bought in the U.S. takes place overseas at the same rapid pace and for low wages. Check the tag on your clothing item. What does it say? Whatever it says, it most likely doesn’t say ‘Made in the U.S.A.’

How does fast fashion impact our environment?

And if you do stray away from these fibers and purchase cotton clothing, there’s still herbicides and pesticides used to raise cotton. Cotton uses lots of toxic chemicals to kill the bugs that would eat the plants that would make the cotton fibers. Any form of consumption will impact the environment, even natural fibers.

According to an article called on Newsweek.com called Fast Fashion is Creating an Environmental Crisis by Alden Wicken, when natural fibers are buried in landfill, they act like food waste. They produce potent greenhouse gas methane as they degrade. You also can’t compost old clothes.

Yes, they were made out of natural materials, but those natural fibers went through a lot of unnatural processes on their way to becoming clothing.

Chemicals from the clothing can also leach from the textiles into groundwater. Burning those items in incinerators can release those toxins into the air. And synthetic fibers, such as polyester, nylon and acrylic, are a type of plastic made from petroleum. They will take hundreds of years, if not thousands to biodegrade.

According to an article on Greenpeace.org called, “What Are Microfibers and Why Are Our Clothes Polluting the Oceans?” by Kirsten Brodde, fast fashion also wouldn’t be possible without polyester. It’s cheap and easily available, making polyester used in about 60 percent of our clothes.

Carbon dioxide emissions for polyester clothing are nearly three times higher than cotton. Our reliance on polyester is part of the reason why the fashion industry is one of the most polluting industries in the world.

And once our clothes reach a washing machine, those synthetic fibers release tiny strands called microfibers. They’re microscopic pieces of plastic, similar to the microbeads you find in cosmetics.

Every time you use your washing machine, hundreds of thousands of those microfibers are flushed down the drain. Many will reach beaches and oceans where they can possibly remain for hundreds of years.

According to the International Union for Conservation of Nature (IUCN), 35 percent of microplastic pollution comes from washing synthetic textiles. Using Europe and Central Asia as an example, they alone dump the equivalent of 54 plastic bags worth of microplastics per person per week into the oceans.

How do you stop fast fashion?

We can’t necessarily stop retailers from partaking in the fast fashion trend, but we as consumers can take steps to become more sustainable and be less damaging to our environment. For example, shopping at thrift stores will not only help the economy, but the environment as well. You can also donate your unwanted clothes to Goodwill, Value Village or any other local thrift stores.

“Instead of just throwing an article of clothing away, give it to Goodwill or repurpose it,” Matthew Hitchcock, EvCC student, said. “Turn a t-shirt into a tank top. Work with what you have.”

Or you can try and sell your items at consignment shops.

“(If) they’re still in good condition and you’d like money back, you can always go to Plato’s Closet,” Kianna Lewis, EvCC student, said.

With that said, you don’t have to completely say ‘No’ to fast fashion.

“As an individual, that’s where it starts,” Davis said. “You don’t have to always wear the latest fashion trends out of New York City and Paris. You can be okay with being a couple weeks behind.”

Buying something on occasion is less damaging than when you’re constantly adding to your wardrobe.

“As consumers, we need to be taking ownership of our financial futures,” Davis said. “Clothing doesn’t increase in value. When you’re buying clothing, you’re gonna buy something that’s going to decrease in value over time.”

Ask yourself, “Is it worth my money?” or “Should I be saving money?”

Taking steps to ensure you don’t overspend as well as using other alternatives when it comes to disposing your unwanted clothing items will make an impact on the environment. Ultimately, it’s up to you. 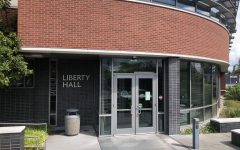 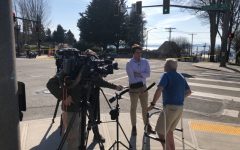 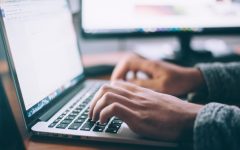 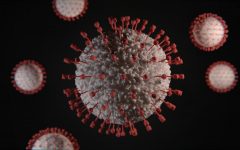