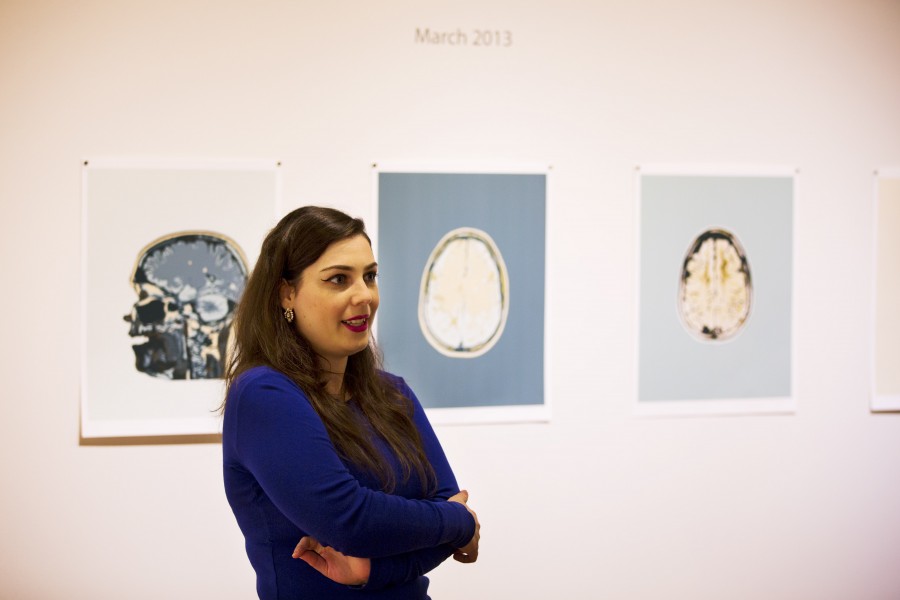 Daisy Patton explaining her artwork at the Russell Ray Gallery on Thursday, Jan 14.

Daisy Patton puts her degenerative disease, Multiple Sclerosis, on display when she turns her brain scans into art she calls “Deterioration” at EvCC.

On Jan. 21,  2010, Patton was diagnosed with Multiple Sclerosis (MS). MS is a progressive disease that causes many physical disabilities over time.  Patton said, “I woke up and my vision was incredibly blurry and I had had perfect vision. I just thought I was tired, and that is why I could not see very well. I was much worse the next day. I was having double vision in addition to the blurriness and unsteadiness when walking.” That is when Patton was taken to the doctor and diagnosed.

Patton describes MS as “where Myelin, which covers the neurons like an electrical cords outer covering. So just like with an electrical cord, if you lose that outer covering the electrical impulses that happen start to misfire and you have problems with communicating. So this is essentially what happens with MS patients. We’re having those electrical impulses misfire, and not be able to complete their circuit.  But it is not like a terminal illness in that you are going to die in five years. It is a very long thing.”

After having MS for the last six years, Patton decided to turn her brain scans into art.  Patton took scans from every year that she had MRI’s (Magnetic Resonance Imaging) done and used Photoshop to give them color. Each set has a color theme. Patton added, “Red is the only [color] that has any specific significance. The rest of the colors are me sort of being playful.” Red symbolizes the new lesions in her brain that appear on the scans.

Patton says she is inspired to use her brain scans to make artwork. “As objects they were really interesting to me. As an artist, sometimes you have something that is speaking to you in a way that you are trying to figure out ‘why?’ ‘what can you do with this thing?’ Visually, I was attracted to them.”

“Sometimes people see these [her art] and start asking questions. When I have people come into my studio, I kind of hesitate because then it turns into ‘oh well you don’t look ill,’ or [people] thinking that I am going to die next year.” Patton said, “Having to constantly educate, being put as a spokesperson can be exhausting. Obviously I invite it because I make work about it. But I have also made those deliberate steps to try and have that detachment and that removal to try and protect myself in a way.”

“Deterioration” can be seen until Feb. 5 from 10 a.m. to 4 p.m. Monday and Wednesday, noon to 4 p.m., Tuesday and Thursday, 9 a.m. to 2 p.m. Fridays, and is closed Saturdays and Sundays. The gallery is free and open to the public.