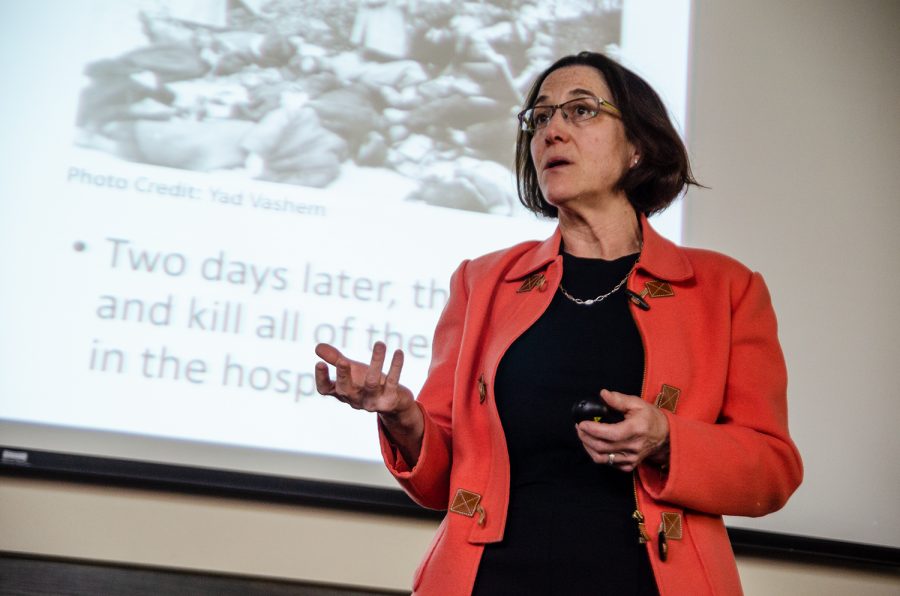 Karen Treiger recounts the poignant story of her in-laws, who were Holocaust survivors that met during the war while hiding in the woods from Nazi soldiers. Treiger spent three years researching their history and authored the book, My Soul is Filled with Joy: A Holocaust Story.

Treiger was a Seattle attorney for 18 years before ultimately leaving her practice to write the story of her in-laws, who were both Holocaust survivors.

“I was very concerned their story would die with them,” said Treiger. She said it was in danger of becoming like a game of telephone. She knew exactly what would happen to the stories if they weren’t preserved, and said it would only get worse as the generations “went on.”

So, Treiger set out on a journey of discovery and spent three years researching the story of Sam and Esther Goldberg. Her efforts culminated in her book, “My Soul is Filled with Joy: A Holocaust Story,” published in 2018.

In her speech on Wednesday, titled, “Sam & Esther: Escape, Rescue & Resilience,” she took the audience on a journey with the young Goldbergs through Nazi-invaded Poland, death camps and hiding places including a forest, a pit and an orchard with a “family of righteous gentiles.”

Sam and Esther’s story played out like a riveting movie, reminding the audience of the horrors endured by so many millions, and the kindness and bravery of those willing to risk everything to protect them.

The Goldbergs’ individual survival stories were filled with incredible feats of daring escape and near-misses. Sam was one of only 65 Jews to escape the death camp, Treblinka, where 870,000 people were murdered.  Esther’s entire family was killed by the Einsatzgruppen, a Nazi death squad, in their hometown while she was in the hospital with typhus.

The Goldbergs met in a forest shortly after Sam’s escape from Treblinka, and were assisted by a Polish family who had been previously helping Esther. Treiger says Esther had “used her golden tongue” to talk the family into hiding them both.

In 2016, Treiger was able to visit the small town and forest in Poland where Sam and Esther had hidden for nearly a year. She saw, firsthand, the forest where they met and the remnants of the pit they had dug for hiding.

Through the course of her research, Treiger was able to track down the three surviving grandchildren of the original families who helped to hide her in-laws. During her visit to Poland, she met with one of the grandsons and shared with him the story of how his grandparents had helped save Sam and Esther’s lives. The grandson replied (in Polish), “My soul is filled with joy,” and thus the name of her manuscript was born.

After the Soviets freed the town where Sam and Esther were hiding, the Goldbergs were able to go to a Displaced Persons Camp (DP camp) in postwar, American-occupied Munich.

From there, they waited four years for visas to America and would eventually arrive in New York Harbor in 1949. Treiger said, “They came with no English, they came penniless, and they came traumatized. It’s not so different from refugees coming to our shores today, who come with those three adjectives as well.”

Treiger concluded with a call to action. “We all have to be part of the solution to this horror that happens over and over throughout history. We have to be a part of the change.”

The Humanities Alliance and the Holocaust Center for Humanity will welcome three more speakers this spring, on select Wednesdays from 12:20-1:20. For more information and details on future Holocaust Survivor forums, visit https://www.everettcc.edu/programs/communications/humanities/holocaust-survivor-forums