The Faces Behind a Beautiful Campus

Go behind the scenes with EvCC's grounds crew 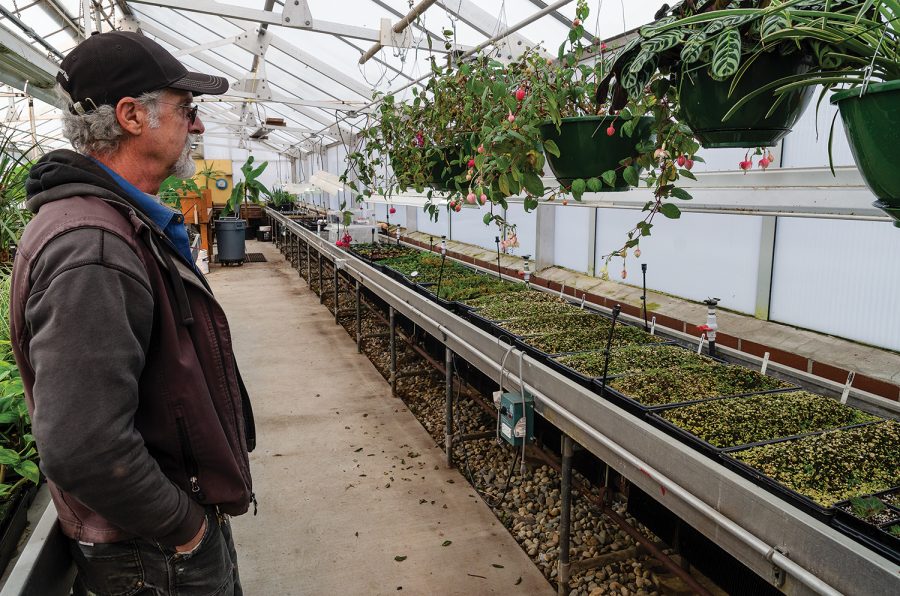 Grounds Department lead John Syson, surveys flowering plants and seedlings that will get transplanted outside the greenhouse in the springtime.

These are the faces of EvCC campus beautification efforts. Each year groundskeepers and facilities department employees all work together to create a beautiful scene of plant life on campus.

They grow cuttings, seedlings, and other various plants year round in the greenhouse on campus. Spring and summer plants like azaleas and lavender will go out and be planted around campus after the last frost in April.

John Syson, grounds department lead, has been at EvCC for 10 years. Along with the help of his crew, Syson grows a multitude of plants in the greenhouse like banana trees, orange trees and even some tropical palm trees. They also use the greenhouse space to grow plants for the annual Earth Week plant swap.

Syson says the most rewarding part of his career is, “Being able to make a change in the landscape and hearing from students and staff that they’ve noticed a change and how much they appreciate it.”

But the groundskeepers do much more than tending to plant life. Bobby Mangrum is a facilities department employee and has been working on the EvCC campus for five years. His job is fixing all of the facilities equipment which includes over 50 pieces of very important apparatus that the facilities department uses. He said his favorite part of the job is working outside, and one of his biggest projects was the installation process of the dedication benches around campus.

Being with the school for so long Syson has seen a lot of change on the campus. He has done a lot of hard work to remove the institutional look from the grounds. In 2011 the grounds crew received the Monte Cristo award for their work. EvCC was one of only six business to win the award that year.

In the future, Syson hopes to have a water feature on campus. The best place for the water feature he thinks would be in front of Jackson Hall, “The Jackson building has beautiful plate glass that when you look out of it all you see is tree trunks and bark. I see it as $100,000 worth of window looking at $10 worth of landscape.”

The changes brought about on campus by the grounds crew have made a more welcoming campus not only for students and staff but also neighborhood communities. Syson has noticed the campus is being used more by people just passing through because it is such a pleasant scene.

Campus beautification is important to Syson. He cares about creating a beautiful scene on campus for anyone who will see it. He stated, “It makes a nice learning environment and its inviting to the guests. It’s pleasing to the staff and I believe pleasing to the students, which is who I care about more than anyone else.”