Faculty union announces vote of no confidence in Board of Trustees 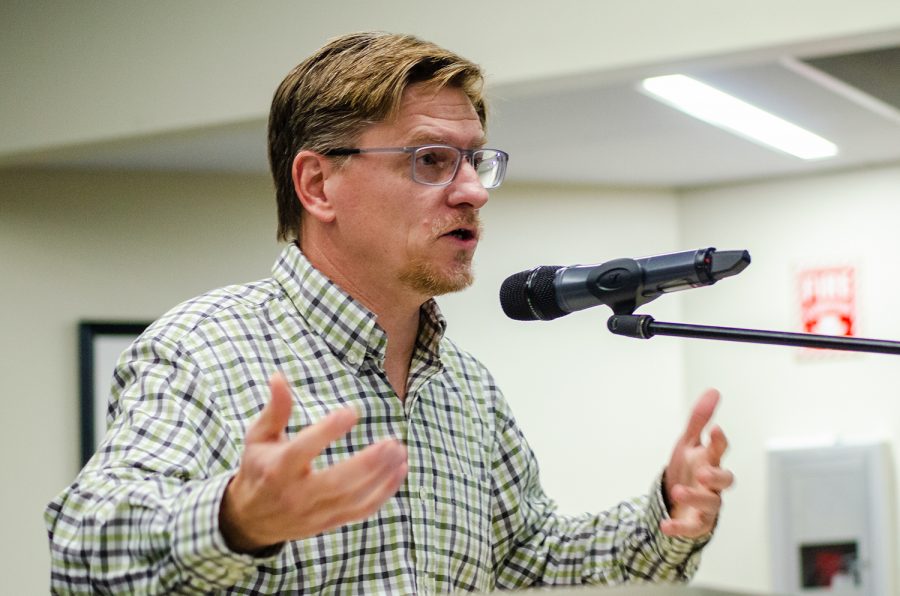 Mike VanQuickenborne, president of the teachers’ union, presents their “vote of no confidence in the majority of the Board of Trustees” on Nov. 6.

EvCC teachers declared the Board of Trustees unfit during the monthly trustees’ meeting on Nov. 6 at the Henry M. Jackson Conference Center. American Federation of Teachers (AFT) Everett chapter President Mike VanQuickenborne said, “It’s a vote that is unprecedented in my 20 year career at the college. It’s a vote of no confidence in the majority of the Board of Trustees.”

The official fracture between faculty members and trustees emerged as a response to the board’s decision to site the new Learning Resource Center (LRC) at College Plaza away from the central campus. VanQuickenborne said teachers have expressed concerns that their own voices, as well as those of the students and staff aren’t being listened to, on the location of the LRC across North Broadway.

Board of Trustees Chair Mike Deller acknowledged that the teachers’ union vote didn’t come as a surprise. Deller said, “So this vote, we hear you, (we’re) disappointed, but we’ll move on.”  He added, “I would suggest to AFT, to our trustees and all the faculty and students, let’s figure out how to do it together. We’ve got a lot more issues moving ahead.”

In response to objections over the LRC location decision, Vickie Norris, the lone board member to vote for the Index site said, “I believe that every board member here discharged their responsibilities as they best saw fit and with serious consideration of the issues.” She continued, “And looking for ways to bring everyone together, to have this work for everyone, is something we need to have dialogue on regularly.”

Karen Linton, faculty senate president, addressed the board and described the teachers as disillusioned and exhausted from repeated attempts to work with the board only to end up feeling disregarded. “So when the LRC decision was made, you have to understand that this was sort of a breaking point for a lot of them (faculty),” she said.

Tears came to Linton’s eyes and her voice began to shake with emotion. “If you’re not going to listen to our feedback, please just stop asking for it.”

174 of approximately 400 faculty members took part in the AFT’s vote, with 79 percent of the respondents casting a vote of no confidence in the trustees. Deller’s response questioned the percentage of faculty members that participated in the vote. “It kind of reminds me of a school levy, a lot of people vote ‘no’ with their feet, they just don’t show up,” he said. “It’s not an overwhelming vote of no confidence in my mind.”

Trish Davies, vice president for associate faculty affairs said, “I will tell you that I hear from associate faculty every day that they will not participate in things like that because they are in fear of their jobs,” she said. “This is not an environment that is healthy.”

Associate faculty members are considered to be part-time employees and have no job guarantees at EvCC past the current quarter. Tenured faculty have significantly more job security at the college as their contract stipulates that they can only be dismissed after a lengthy process.

Davies then stressed her personal stake in speaking out. “I am associate faculty, if the administration doesn’t like what I have to say tonight, I could be out of a job by June,” she said. “I do have a contract for this year, but nothing beyond that, I hope that you would take into consideration how important this is to me, that I would sit here, knowing that my job is in jeopardy by saying these things.”

Librarian Bob Bertoldi, during a break in the meeting, expressed his worries about the Board of Trustees. “Our concern is that the priority is not on the mission of the college, which is to help students succeed. We feel like making their daily life on campus more of a scramble to get from A to B, to get the services they need in a more remote location is not helping them succeed,” he said.

The board’s official response to the AFT’s vote of no confidence was sent out November 13, in an email to EvCC staff on the behalf of Deller. He defended the board members’ characteristics, backgrounds and the duties expected of them when they are appointed to be trustees by the governor. Deller then highlighted the board’s time and efforts put into researching their decision to site the new LRC at College Plaza, as well as the ways that they are trying to respond to safety concerns about it being located across North Broadway.

Deller also cited EvCC’s growth over the past 20 years and suggested that the campus may continue to expand eastward and shift the center of campus closer to North Broadway. He touted the school’s stability of enrollments and finances, in addition to the board’s approval of faculty members for tenure and new educational programs.

Finally, Deller expressed all of the board members’ disappointment in the AFT’s resolution. “This Board is engaged and will continue to engage with the campus community, students, faculty and those community members and leaders who are so very proud of EvCC,” he wrote. “We’re encouraged that students, including the ASB leadership, the LRC planning committee, and members of the college community are looking at how to move forward, and the Board will continue to focus on communication and problem-solving with all involved.”