“All I ever wanted to do was play soccer. College was the route I had to take.” 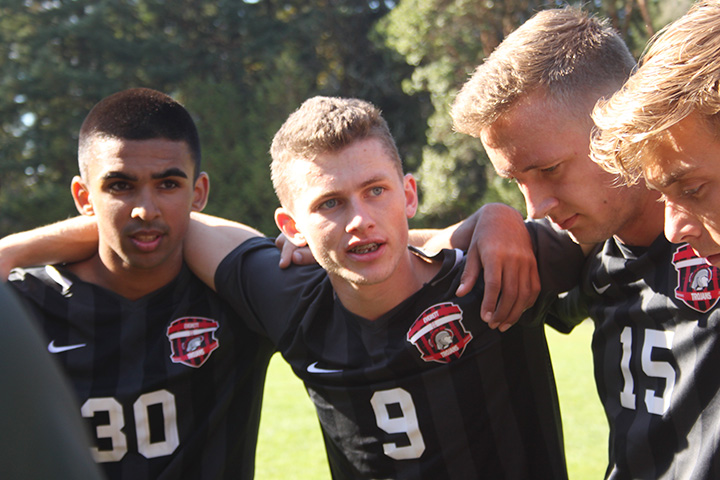 Gregor Byrne ( middle ) rallies his teammates in a pre-match huddle before their match against Shoreline on October 6.

There have been two things that Trojan’s sophomore striker Gregor Byrne has pursued. The first is playing guitar. “My dad got me playing guitar when I was 8 years old,” Byrne said. “At first it was forced on me like a chore, but when I got into high school I started playing every day.”

If Byrne’s not strumming several licks from songs from his favorite artists such as Iron Maiden or Led Zeppelin then he’s playing soccer. Another passion originally instilled in him by his father. Soccer is prominent in the Byrne family, as his father is from Northern Ireland and his mother is from Scotland.

In his first season at Everett, Byrne took the Trojans and NWAC by surprise, scoring 11 goals in Conference play, 16 goals across all competitions, and getting the EvCC Men’s Soccer Team to the NWAC Playoffs for the first time in five years. After a successful 2017 season, many would assume that EvCC was in a long line of community colleges and universities who were offering Byrne scholarships to play soccer. The origins of Gregor Byrne is a tale of talent gone under the radar.

In his early playing years, Byrne showed that his skill and talent outmatched local recreational youth leagues, scoring goals at an abnormal rate. “When I was little I used to run zig-zags around people,” Byrne said. As he got older he dominated the competition with ease. “I would score about 5 to 6 goals a game.”

It wasn’t until high school that Byrne began playing select-soccer for the youth club Washington Rush as well as playing for Everett High School Boys Varsity Team. The overall team results season after season were mediocre. Without a high school team to showcase his skills and no colleges able to scout him, Byrne went under the radar.

Erik Cruz, who was an assistant coach for the Boys Varsity Soccer team for two seasons, liked what he saw from Byrne. “He liked my pace, how hard I worked and my passion,” Byrne said. After Byrne graduated in 2017, Cruz, who was beginning his second season as Head Coach at EvCC,  managed to recruit him. The rest is history.

All signs this season indicate that he will duplicate his goalscoring form from last year as Byrne has scored 8 goals in conference play. Former Trojans teammate Ariaan Cardenas can attest to the mentality and expectations that Byrne will bring on matchday. “He’s ambitious; “he wants to win”, Cardenas said. “When he loses, he doesn’t take it lightly and wants to improve from that result.”

Although he is in college, Byrne has not found any profession he is interested in pursuing as he completes prerequisites courses to achieve his associates of arts degree. Despite this, Byrne has a deep desire to work hard in college.

“Since I’m paying for classes I’m not going to take school for granted like I did in high school”, Byrne said. “No one in my family has been to college. My dad always pushed me to go to college.”

Byrne doesn’t see his playing days stopping anytime soon once he’s done at EvCC. He’s willing to take on the next challenge whether it’s transferring from a D1 school or trial with a semi-pro or professional soccer club. One thing is for certain he’s cemented his legacy not only as one NWAC’s best goal scorers that Everett’s Men’s Soccer Program has ever had. “All I ever wanted to do was play soccer. College was the route I had to take.”