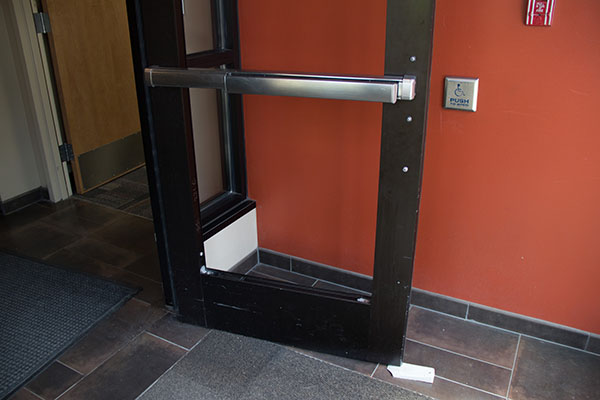 The south side door of the Parks Student Union building is in the process of being fixed. In the meantime, it will remained out of order.

A man on methamphetamines was arrested after breaking a Parks Student Union door on May 9. Around 4:20 pm, campus security received reports of a suspicious man carrying around a large bamboo pole of about six feet long.

When the security officer arrived at Cedar Hall and tried to make contact, James Little began to threaten the officer. “Your mom!” he yelled. “I will kill you!”

Little lifted the bamboo pole as if to strike the officer, and the officer backed off.

Little then ran towards Whitehorse Hall with the officer following behind at a distance to maintain a visual. As Little ran through Whitehorse Hall, witnesses made calls to 911.

Little then ran towards the PSU building, still carrying the bamboo pole.

Taylor Hentges, a worker at the Bargreen’s coffee shop in PSU, was working when he entered the building. “He walked past me, casually dragging the bamboo,” Hentges explained. “He went up the stairs next to the cafe. I was just so confused.”

Little eventually stopped inside the Diversity Equity Center on the third floor.

When the security officer caught up with Little, the officer confiscated Little’s bamboo and waited with him until the police arrived.

Little was placed into custody and police escorted him out of the building. He was reportedly thrashing around, unwilling to cooperate with police.  “He was just not happy to be in handcuffs,” Hentges said.

As they were walking out the south exit near the PSU security office, Little intentionally fell forward leading with his shoulder and knees, breaking the glass of the left inside door. Little was uninjured.

Juno Valencia, an EvCC student and Snohomish Bakery worker, watched the entire glass-breaking incident. “After he broke the glass, he just fell to the ground,” Valencia said. “One of the police officers who was escorting him just looked down and said, ‘Really, dude?’”

Chuck Macklin, director of campus safety and emergency management, arrived at the scene when the individual was in the Diversity Equity Center. “It was a pretty dynamic incident,” Macklin reflected. “It evolved very quickly, and it didn’t take much time from the beginning to the end of the incident.”

One of Macklin’s responsibilities is to send out RAVE notifications to students when emergencies occur. “This was not a RAVE incident because it was at the end of the day and not many students were at risk,” he said. “There were also no serious threats made to anyone besides the security officer.”

Campus security officers receive defense training and are given non-lethal tools for scenarios that escalate into physical altercations. “The intent this time was to maintain visual of the individual until police arrived,” Macklin stated. “The officer made a good judgment because the individual didn’t threaten anyone else.”

The individual was charged with fourth degree assault and criminal mischief. The PSU door has since been fixed.