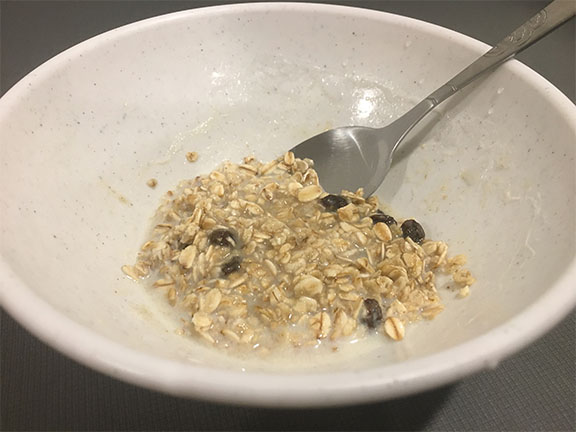 Photo of oatmeal with dried fruit and hot milk, it includes a lot of healthy ingredients. It’s like a breakfast cereal.

The changing of the seasons can affect your health, so each country’s people are taking care of themselves with their soul foods.

This extreme cold season is ending and the warm spring season is around the corner. However, once you stop caring for your health, you may fall sick. To keep that from happening, there are many traditional foods around the world that are healthy.

The stereotype is that American food is bad for you. Even if that’s correct, it doesn’t mean there is no healthy food in the U.S.

For example, oatmeal is made of threshed oats that are processed to work easily. The natural taste is not good so almost all who eat it mix dried fruit and milk with it. It’s so easy to make that it’s suitable for breakfast.

In Japan, one of the healthy foods are soybeans. They contain high quality protein and the digestion-absorption rate is higher than other foods containing protein. Also, soybeans have various uses.

Not only for foods like tofu but also for seasoning like soy sauce and miso. In Japanese daily life, things made by soybeans are here and there. That’s why Japan is one of the biggest longevity countries.

Kimchi is famous for South Korean’s soul food. It’s fermented vegetables with salt, red pepper and garlic. Jiyoon Jenny Hwang, an EvCC student from South Korea said, “I eat it almost every day. I like it because I’ve been eating it since I was young.”

It includes a lot of good ingredients and is a fermentative food. The longer it’s fermented, the more it has a hearty taste, so Koreans make it by themselves. Hwang also ate homemade kimchi in her country.

Dimy Komi is an EvCC international student from Papua New Guinea and he recommended papeda to keep in top shape. Adding salt and sugar, papeda is made by a flour of Sago palm- that is a type of tree in South East Asia.

It has no taste but doesn’t contain impurities. They mainly eat it with a soup made by a seasoning and fish. Komi said, “Papeda is my traditional healthy food that I’ve eaten so far.”

A common saying is “You are what you eat.” Food depends on each culture. Even if you don’t go to other countries, you can learn what they are from their wholesome foods.