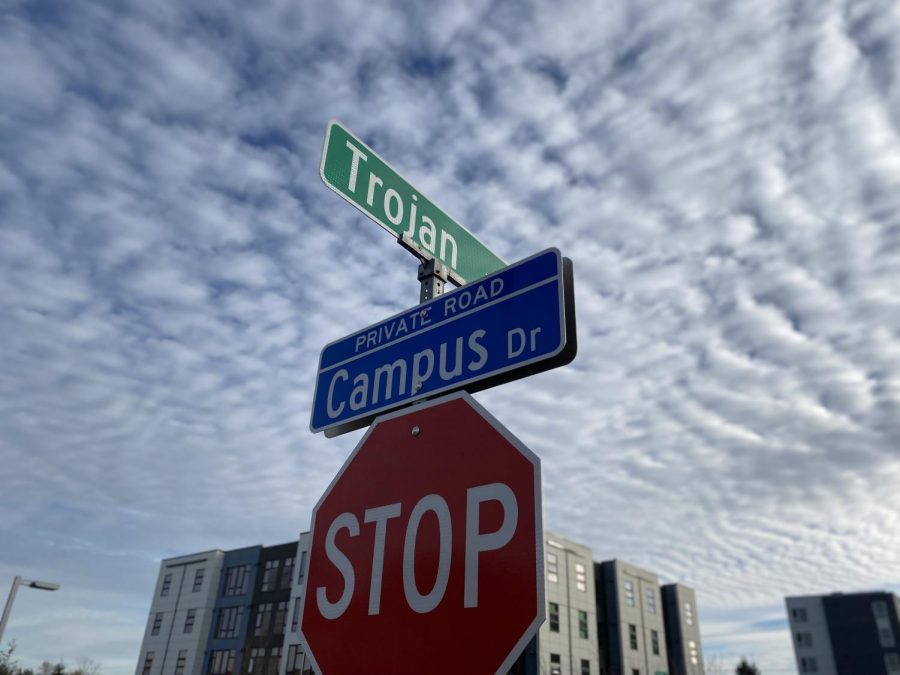 With the report of an alleged assault happening on campus recently, the question of how safe our campus is has risen quite greatly. Not only does our campus have to deal with the threats of where we are located, our staff and faculty also have to protect our inward safety by having set protocols in place as well as teaching students how to protect themselves.

Within Sep. and Oct. of 2021, our campus and it’s close proximity has housed 18 crimes. These crimes include four accounts of property theft, one breaking/entering of a vehicle, two trespassers, one hate crime, one attempted theft, three accounts of vehicle prowl, one harrassment, two student conduct violations, one sexual assault, one damage of property and one account of missing state property. That doesn’t include the sexual and physical assault that happened in early Nov. or the physical assault of a resident in mid Nov. All of these crimes can be seen on the EvCC Crime Blotter.

In Sep. and Oct. of 2019 when students were fully on campus, there were only 15 crimes. These included four accounts of disorderly conduct, three property thefts, two threats/intimidations, one sex offense, one harassment, two stolen vehicles, one assault, and one account of an intoxicated person on campus.

Under the Clery Act, EvCC is required, “to report campus crime data, support victims of violence, and publicly outline the policies and procedures they have put into place to improve campus safety.” A big part of this law is to make announcements of safety risks on campus. These are known as Timely Warnings. When a crime on campus occurs, staff are required to evaluate the severity of the crime and the risk of a threat to campus, then make a campus wide alert.

On Nov. 3, one of these Timely Warnings were sent out campus wide regarding an alleged sexual and physical assault which is still under investigation. But why weren’t the previously mentioned crimes alerted to those on campus? According to the 2020 Annual Campus Safety and Fire Clery Report, “the decision to issue a timely warning (and the content of the warning) is decided on a case-by-case basis, considering all the facts, including the nature of the crime, the continuing danger to the campus community, the promotion of safety, and the possible risk of compromising law enforcement efforts.”

According to the Director of Campus Safety and Emergency Management, Charles Macklin, “In my five years of working here, we have sent out maybe a half dozen alerts. We could send more out but there are different colleges that kind of over send information and the feedback on that is that it’s not good because a lot of students become kind of desensitized to getting information and a lot of students will actually opt out of the notifications because they just don’t like getting that many.”

However, don’t many of the crimes that have taken place pertain to the criteria of an ongoing threat? Taking trespassers as an example, if this is a continuous issue that has happened, then shouldn’t students have the right to know so that they are able to be more conscious of their surroundings?

How Students are Protected

Macklin says, “[Our campus] is one of the safest in the state system and even nationally it is a very safe campus.” He also mentions that we are very fortunate to have such a safe school due to where we are located.

Macklin says, “We don’t want you to have to depend upon the presence of a security guard to feel safe. We want you to be empowered to be safe yourself and to keep others safe.” That being said, EvCC still has security officers on call 24/7.

Along with these officers, our campus is also built with safety in mind. The lights outside are motion automated to ensure that if anyone is walking while it is dark, they are able to view their surroundings. There are devices outside of buildings that listen for the sounds of shattering glass or fighting and another major implementation is the use of the Informacast system. This allows security to present information and alerts to any part of the campus via campus phones’ speaker systems.

How the Students Feel

Through data obtained through 21 different student’s input, most students who attend classes generally feel safe while walking through campus. 80% of students say that they feel safe, while 20% say they don’t.

Some students mentioned that they do feel safe on campus because they haven’t had any issues themselves and they feel safe due to the presence of security and staff. While others reported that they feel unsafe due to where our campus is located as well as a few accounts of stalking that one student faced.

One student said, “I do feel the campus is safe overall. However there are times I do not feel safe or feel uneasy. For example, I come to campus very early, around 6:30 am, with little to no cars around. I do wish security was more present in the mornings.”

14.3% of students didn’t want our administration to alert us on it while 85.7% of students wished they were better informed.

Not only is our campus a learning facility for students, but it is also a place many call home. Those who live in Mountain View Hall and Cedar Hall have a 24 hour view of what goes on in our campus.

Stasia Ka’ahanui is an EvCC student who also lives on campus. “I haven’t experienced any safety issues but I can say that I’ve experienced times of feeling unsafe while walking alone to and from campus back to the dorms. I feel most safe in the dorms and [I feel] the least safe in the school parking lots,” said Ka’ahanui. Outside of our campus buildings are where nearly all of the crimes have occurred; primarily at night.

“Personally I haven’t had any direct safety issues that have immediately affected me but I still have concerns,” says Rachael Hendrickson who lives on campus and is also a resident’s assistant, “recently there have been a lot of cars getting broken into and as it is getting colder more people living on the street are looking for a warm place to stay. Regardless of their intentions it is still concerning to have a stranger hiding away in the corner when they are not supposed to be there.”

“[Safety means] having the trust in those who work at EvCC whether it be campus security or your teacher. It also means being free from risk and harm, not being out in dangerous situations,” Ka’ahanui says, “for the safety of residents [and students], they should be aware that these things could happen, and to just be on the lookout.”