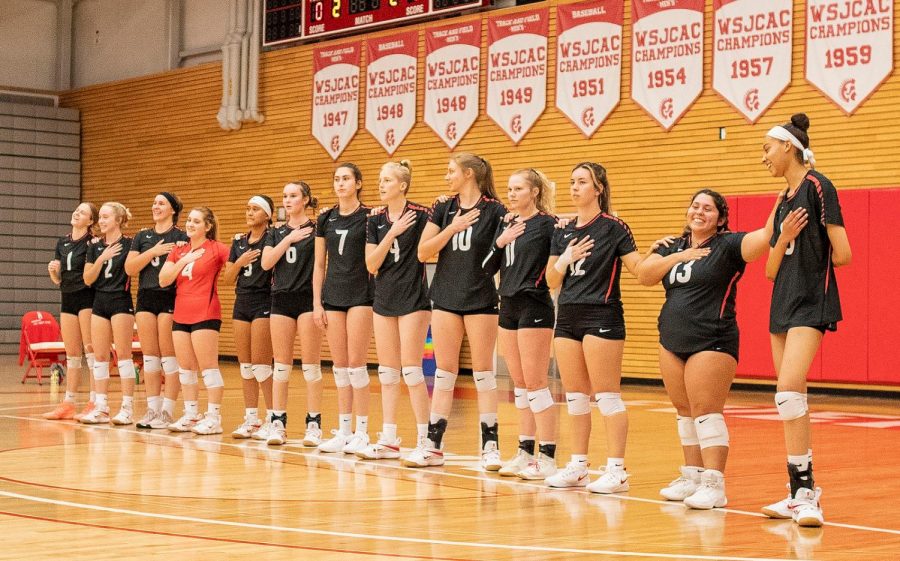 The 21'-22' EvCC Volleyball Team together, pledging towards the national anthem, during the Sept 24th game against the Shoreline Dolphins.

There’s nothing quite like watching sports live. After a pandemic without these events, more people than ever are grateful for the experience of watching a team of passionate athletes give their all, surrounded by a crowd of roaring, passionate fans. These events, at their best, bring a communal feeling of energy and excitement to the towns, cities and yes, campuses they call home, and that has certainly happened here in Everett.

Playing (almost) weekly home games at the Walt Price Fitness Center, the EvCC volleyball team has been a much-needed presence at a college that’s still trying to wake up from an 18-month nap. Today, they’ll play their last home game of the season, and despite what their persistently positive outlook would suggest, they’ve gone through a lot of ups and downs to get to this moment.

The players started out with a strong pre-season, engaging in some intense, neck-to-neck matches and winning every other game. It wasn’t the best performance, but it demonstrated how passionate this new group of players we’re from their first moments on the court. That passion kept them going into the regular season, but things slowly began to fall apart.

They soon found themselves getting sweeped by their opponents with more frequency until, after reaching a peak of back-to-back wins on the same night, they tumbled into a painful 4-game losing streak, all home games at a newly reopened campus. It was a low point, to say the least.

Just recently however, the Trojans managed to turn things around when they absolutely dominated the ShorelineDolphins with a 3-0 victory, preventing multiple attempts at a comeback. Not only was this their first win away from home, but it was some of the best volleyball the team has ever played.

So, what went right? What made the Shoreline game such a roaring success? The answer, according to #10 player Sarah Campfield, is all about morale. “I think we (the team) all have the ability to do our jobs solo, but when you work together, it’s a big mental game. So, if one portion of the team is starting to slow down, that can bring everyone else down. But if they do really well, then everything goes up, your spirit goes up, your ability to execute the ball goes up. You just do better.”

There was a wide-spread agreement among the players that, when you enter a game with complete confidence in your team’s ability to score, serve and pass, you’re more likely to leave with a win. So, through motivational exercises, positive reinforcements, analytic-based goals and new-found study time, head coach Whitney Williams has emboldened the self-esteem of her players. “It’s been a pivotal season”, says #11 player Jayda Grosbell, “Not just in volleyball, but in growing as both a person and a player.”

This is one of the great things about Trojans Athletics. If you’ve spent any time among the athletes, you’ll discover a positive, empathetic community where different teams intersect and support each other. The women’s basketball team, for example, are big, boisterous volleyball fans, cheering their team on during home games and knowing every player’s name by heart.

It’s that mutual love and respect among athletes that makes the Walt Price Fitness Center such a bright place of positivity on-campus, and it has created a company of 14 incredible athletes who, despite only a season together, have grown leaps and bounds in both persistence and relentlessness.

That’s why, win or lose on Friday night, assistant coach M’Kailah Redden remains incredibly proud of her players. “To be honest, it’s just great to see our team playing freely together and just enjoying themselves.”