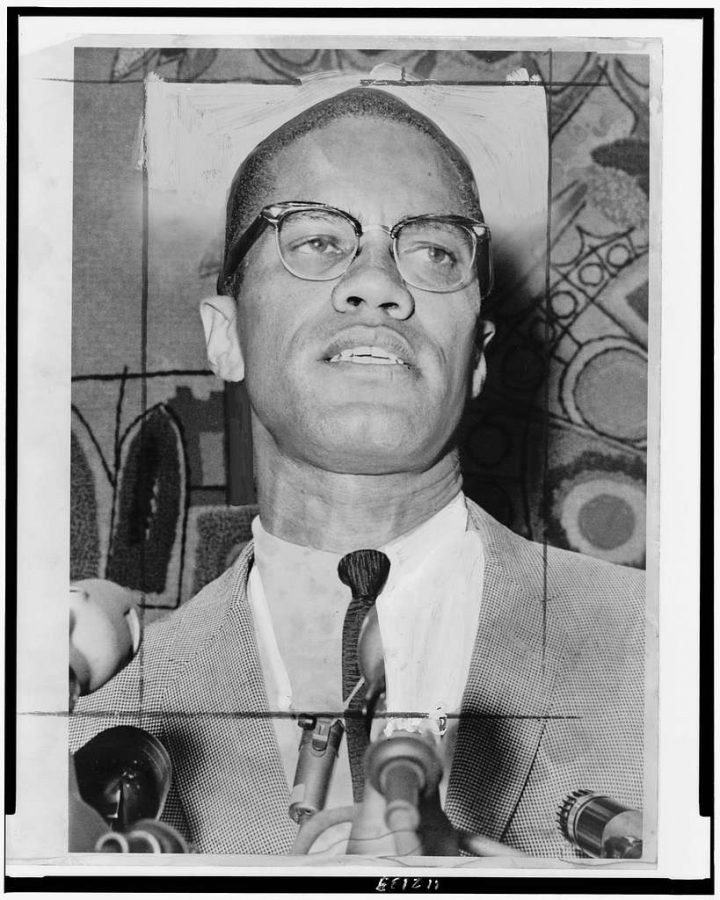 Popular civil rights activist Malcolm X is celebrated with a holiday on May 21. Our diversity and equity center inspired by him will hold a black excellence commemoration featuring guest speaker David Banner on May 19. The live zoom event takes place at 2 p.m.

The human rights activist was born May 19, 1925, in Omaha, Nebraska. Being the son of followers of Pan-Africanism, he and his family experienced the savage reality of racism often. His father passed away when he was six in a “streetcar accident” but both Malcolm and his mother believed this was the doing of white supremacists. Soon after at the age of 13, Malcolm’s mother was committed to a mental institution and all of his siblings were split up amongst different foster homes.

He moved to Harlem, New York when he was 18, and turned to a life of crime that resulted in him getting sentenced to eight to ten years at Charlestown State Prison. In his second year at the prison, his brothers and sisters began to write to him about a religion they called the “natural religion for the black man.” It was here that Malcolm began his life-changing journey becoming a Nation of Islam Muslim, following religious leader Elijah Muhammad.

A major staple of the Nation of Islam is removing the last name given to you because it is not your true last name and rather one given to you by slave masters. This is when Malcolm Little became the Malcolm X we know today.

He began leading and expanding the Nation of Islam through multiple temples before becoming the leader of Temple No.7 in Harlem. There he went on to lead and inspire many oppressed African Americans to love and stand up for themselves through the teachings of Islam. Malcolm’s speeches and teachings were beginning to become renowned, and his impact was being acknowledged on an international level.

Tensions began to rise in the ’60s after Malcolm found out about Elijah Muhammad’s extramarital affairs. The two were already on rocky terms due to Muhhamad’s disapproval of Malcolm wanting to work with other civil rights leaders and politicians. This disillusioned Malcolm with the Nation of Islam’s view and led to him publicly cutting ties with the group soon after.

After leaving, he began studying Sunni Islam and creating organizations such as the Muslim Mosque and the Organization of Afro-American Studies. Traveling across the world, performing the Haji, meeting world leaders, all while teaching and expressing black nationalism and pride.

However, a poor split between Malcolm and the Nation of Islam left bitter, hostile feelings in the air. Malcolm and his family often received death threats from the group, in addition to having a bomb set on their car, and even having their house burnt down. On Feb. 21, 1965, the civil rights leader was shot 21 times while preparing to deliver a speech at the Audubon Ballroom.

DeLon Lewis, a program manager with the diversity and equity center at the school decided to organize the Malcolm X Day virtual event to celebrate the achievements of Black Student Union graduates as well as the winners of multiple community and diversity awards. In honor of Malcolm X’s philosophy, he wants to let the achievements of our “brothers and sisters” here in the community to be acknowledged.

“Humanitarians such as Malcolm should be celebrated more, Black history month isn’t enough, neither

are single holidays,” says Lewis. “Black excellence should be celebrated and integrated throughout our everyday lives.”

The influence of Malcolm X continues to be displayed through the works of social justice in today’s society as well as books, film, music and more. His journey showed that through the face of opposition and oppression, you must learn to love and define yourself and stand firmly in that role.