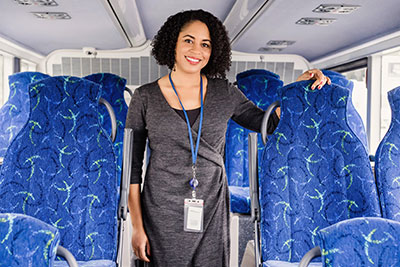 Finding a balance as an older student with a full-time job and family life can be a struggle. This is a common experience for some college students but many are able to push past these hurdles and graduate proudly.

When Alistair Blair, 55, and Nashika Stanbro, 42, started school again, they held full-time jobs. Stanbro was also a parent. These common aspects of adult life put them in the demographic of non-traditional students. According to the National Center for Education Statistic: A non-traditional student is described as someone who: started post-secondary education later in life, usually 25 years or older; attends college part-time; works full time; is financially independent for financial aid purposes; has dependents other than a spouse; is a single parent; or does not have a high school diploma.

Both students felt their main barrier was taking time out of their workday to attend classes. Stanbro even stated, “Some of my classes were during the day, at the time I would normally be working. So I lost those hours at my job, at the time, in order to attend class.”

Stanbro had to pick up a second job on the weekends to make up for those lost wages. She did find it very convenient to have online classes, especially with a child. Blair felt online was convenient as well but said, “Working online sterilizes [the learning] experience. The best way to learn to work with people is in-person. One has to learn to deal with difficult personalities.”

EvCC offers three different associates degrees through its eLearning program that may work better for those who prefer online classes and may not have time to get to campus. The schools’ Director of Public Relations, Katherine Schiffner says, “[These] options were available prior to COVID-19, and are still available!”

The school is also keeping non-traditional students on their radar for the future. Cathy Leaker, Vice President of Instruction for EvCC, was working as faculty for a college in New York designed for the non-traditional student before taking on the vice president title in July of 2020. Bringing some of the same values she learned from working with those students, she says EvCC is focusing on making more programs available to the non-traditional student. In addition to more online degree options, Leaker stated the college is working on starting a weekend program for students to get degrees as well.

Bonnie January of the EvCC’s Department of Institutional Research was able to pull data from the last four years of graduation rates for non-traditional students aged 35 and older. The graduation and certificates earned rate for this demographic are coming in at just a little under 20%, and the overall graduation rate for 2018 for the Fall 2015 cohort was 36%. January says, “the rates have been going up over the past few years” for non-traditional students.

In the end, both students and others like them were able to find success in their studies and persevere to get their degree. Their determination and flexibility from their jobs allowed them to attend classes.

It has been over thirty years since Blair graduated with a degree in economics from the University of Cape Town South Africa. After he immigrated with his wife to the United States, he was having trouble finding work with his current degree because it didn’t hold the same merit as an American one. This pushed Blair to take on more schooling at EvCC to make the degree translate but eventually, he decided to start over. He will graduate with an associates degree in accounting this spring.

After over 10 years of working in the medical field, Stanbro decided she wanted to switch industries and expand on some of the same skill set she’s learned through her career. She chose EvCC because it was close to home and work which made it convenient. After EvCC, Stanbro graduated from WSU’s Integrated Strategic Communications program in 2018. She now works at Community Transit where she is the Diversity, Equity and Inclusion Program Manager.

Going back to school at an older age and still having to maintain a job and family life is difficult but it can be done. Stanbro offers some advice for success for other non-traditional students, “ I would say work with your employer and see if they can offer you some kind of flexibility… I would also tell friends and family about your educational goals so they can support you to succeed.”