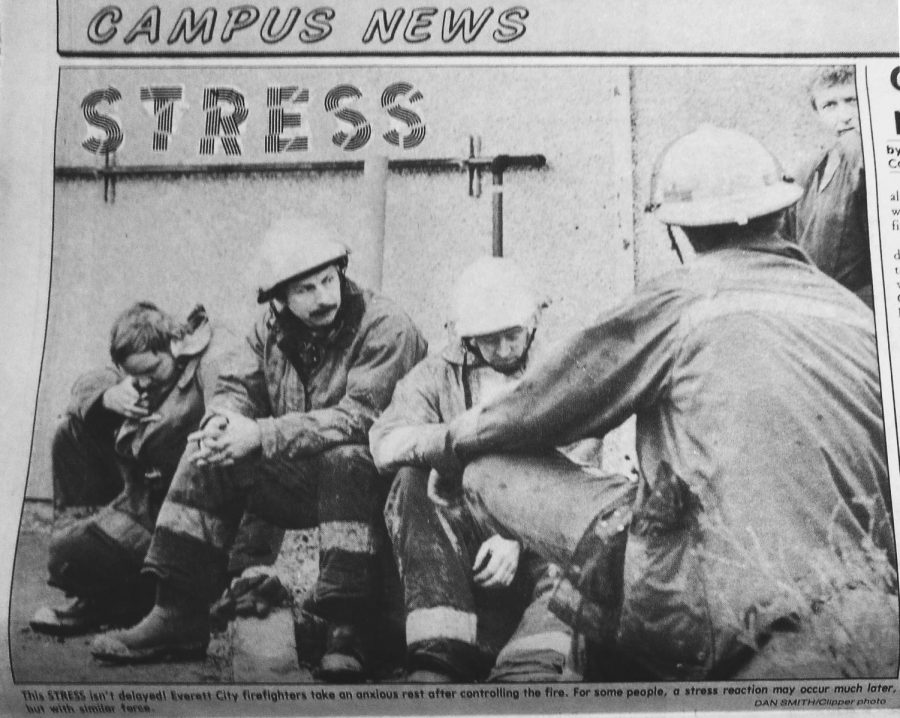 City Of Everett Firefighters take a rest from fighting the fire.

On Feb. 16, 1987 a 3-alarm fire broke out in Cascade Hall at Everett Community College. Hours after the fire had started a security guard felt guilt for not closing a window in the library, where the fire is suspected to have started. Cascade Hall was completely burnt to the ground and the only things left salvageable were parts of the EvCC culinary program’s French restaurant, La Salle d’Ecole, ’The School Hall’, very few library books and the Feather Star.

The French restaurant did not return, but losses were more devastating than just the culinary department. Nearly all of the documents before 1987 were lost to the fire, including college records, club records, yearbooks and sports records.

What remained of Cascade Hall was demolished to build a new building. This building would be named Parks, after Gary Parks, an Everett firefighter who died in the inferno. A brass memorial and bench were also constructed in memory of Parks as a reminder of the ultimate sacrifice he made for the community. The memorial still stands today on the sidewalk path between the Feather Star and Parks Building.

Some books were saved, the Feb. 27, 1987 edition of The Clipper reported that two students, Carl Erikson and Brockton Sides, grabbed hardhats and began to carry textbooks and other books out of the library as fast as they could, eventually using wheelbarrows. The crane operator yelled that the crane cost $200 per hour to rent, but they kept taking any book that could be salvaged and were soon joined by the librarians. Erickson told The Clipper that “I guess he didn’t know we were saving books that were $50 or $80 dollars apiece.” Erikson also proposed “a statue of a fireman in full gear near the entrance” of the new building in hopes for an appropriate memorial for Gary Parks.

This article contains 15 photos from the Feb. 27, 1987 edition of The Clipper and 2 photos from March 13, 1987 edition of The Clipper. Most of the print and the centerfold of the Feb. 27, 1987 Clipper were dedicated to the fire. Each photo was digitized and retouched with Adobe Photoshop using only black and white, cropping, and brightness filters to enhance but not alter the original images beyond their original state. Another article covers the Mar. 13th, 1987 Clipper and features unedited high definition scans of the full article.