Here's a notification: you might be addicted to your phone. 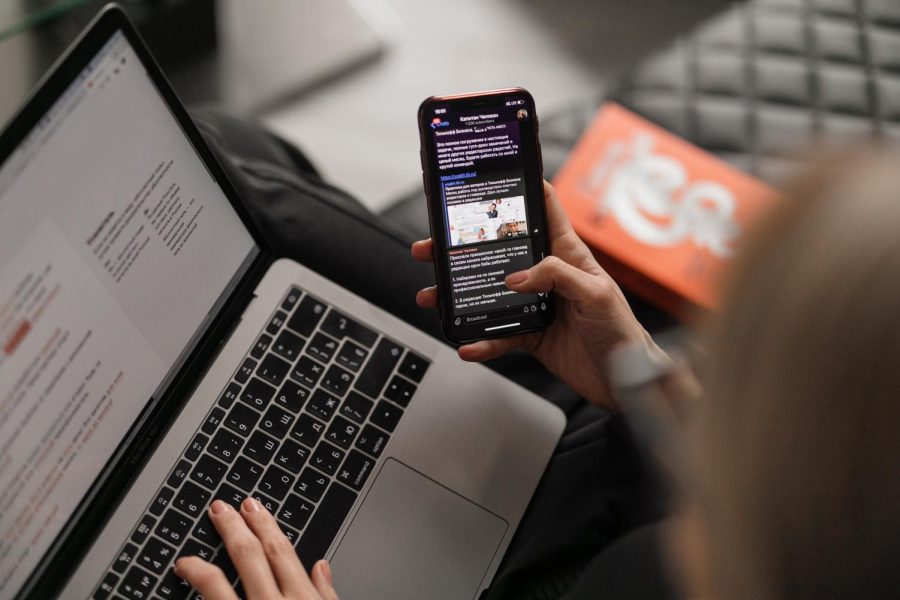 Photo by Maxim Ilyahov on Unsplash.

Woman working on her laptop while also on her phone.

The alternate dimension of our phones has been nearly impossible to avoid as of late. Keeping in contact with loved ones, getting updates about the health and status of the world around us and being able to do your occupation have all become activities that cycle through our now frequent, digital to-do list.

The double-edged sword of technology has long been questioned. As humanity continues to innovate and discover new ways to utilize technology, individuals will take it upon themselves to find out how to use it for their personal gain. It’s not just the large conglomerates and companies that use targeted ads and algorithms that imbalance our phone use, but also the exhausted college student who has three assignments due and only feels they have energy to read comments instead of textbooks.

The connection between these devices and our minds runs deep. “Our phones are for many a source of comfort, excitement, and a way to get lost in a world beyond ourselves. For our brains it’s a massive, joyous moment each time we connect with our phone,” says Dr. Efrain Centeno, a psychology professor at EvCC. Centeno says that the brain rewards you with literal happiness through the release of a chemical called dopamine. Smartphones are personalized slot machines that set off chemical receptors with each notification we get.

A study at the University of Missouri showed that our attachment to our phones goes beyond the reward of dopamine. Participants solved a crossword puzzle while wearing a wireless blood pressure cuff. After completing one puzzle they were asked to move their phones across the room because of “Bluetooth interference.”

“In psychology, we teach Ivan Pavlov’s famous discovery of association. We associate cues with things we are addicted to, and we tend to react similarly to both,” says Centeno.

“I would only like to use my phone when responding back to messages and emails. But if I’m being honest, I’m using it during my free time,” says Esperanza Guzman, a current EvCC student. Guzman has seen a decrease in her phone use during the quarter. “I use about 3-4 hours of screen time a day because I have school and work. But it used to be 5-6 hours a day when I had no school, so I would say school is a big distraction in a good way.”

While acknowledging some of the overall positive effects that phones can bring such as “information at your fingertips”, Guzman notices the negatives as well. “It can distract me from doing things I have to do. I would have an errand to run and I would take longer because I am on my phone.”

In our ever-changing society, the younger generation has been born into a world where it’s natural for them to become glued to their phones. “Our children have become highly addicted to many of the apps on their phone. It distracts them from their academic work and causes social isolation within the home, cutting off or severely limiting communication between children and their parents,” says Dr. Centeno.

This problem is directly linked to social media. A virtual world of validation can be deceitful to our brains, especially to children. The feeling of needing to be approved or accepted has long been wired into our minds, back to our hunter-gatherer days. Acceptance and rejection determined the likelihood of survival, and while that may no longer be the case, the brain still prioritizes those needs.

“Ideally I’d want to use [my phone] to stay in contact with people, stay up to date on current affairs, and occasionally watch TV or scroll social media. I do those same things now, but the emphasis is mostly on social media. Too much time is spent there,” says EvCC student Gabe Lopez. While averaging about 4.5 of screen time a day, Lopez has noticed difficulty getting off his phone. “I’ll spend too much time on my phone, and I won’t have enough time to finish all my homework,” he says.

Smartphones are a very powerful tool; they’re a supercomputer that communicates with people around the world from the palm of your hand. However, with great power comes great responsibility, and learning to use your phone with intention is part of that. Taking inventory of how we use our smartphones, setting limits and deleting distracting and unnecessary apps can go a long way in teaching you to control your phone, rather than the other way around.

Here is a quick list of steps to take in order to get control of your own personal cell phone use.