What’s up with the ‘New Dorms’

KoZ on N Broadway, a new student living option, has different rules and opportunities than the EvCC dorms. 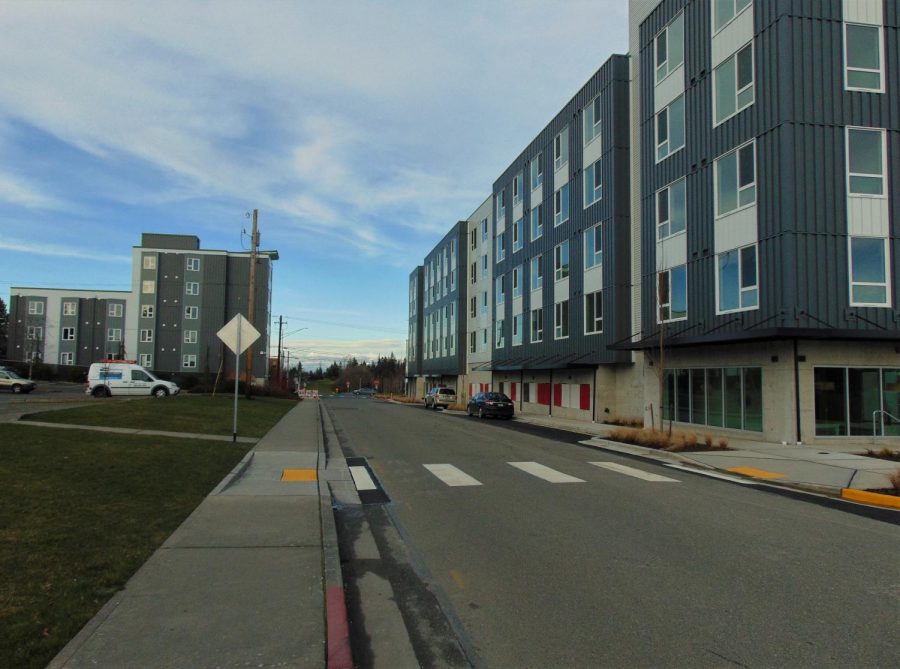 Students have a new living option near campus now. KoZ on N Broadway is open and renting to students as of late last year. The apartments for rent will house mostly students but are not required to follow the same rules as EvCC housing.

KoZ on N Broadway features 124 living spaces and 62 parking stalls and welcomes pets. “Koz on N Broadway is a project that is open to both students and non-students. The policies will be consistent with any other apartment building,” says Cathy Reines, KoZ President and CEO “The building itself is secured with fob access as well as cameras throughout the building and outside lighting.” Apartment rules are not the same as EvCC’s dorm rules.

“We allow pets,” says Reines. Up to two cats or dogs are allowed per apartment. EvCC dorms do not allow

cats or dogs but do allow one fish tank up to ten gallons, that’s well maintained. College campus rules also apply to the dorms at EvCC which means no weapons of any kind, no marijuana and no alcohol can enter the dorms. Title IX – Sexual Violence and Sexual Harassment Policy is also in effect at all times on dorms’ property. College campus rules and Title IX are not required to be enforced at the KoZ on N Broadway

Apartments. Student Residential Assistants (RA) are also available at EvCC dorms but are also not required at KoZ on N broadway.

Whose Corner is it Anyway?

The new building complex towering over Starbucks located next to Cedar and Mountain View Halls has been a mystifying story for the EvCC community. For years rumors of a new dorm have been circulating. After a lawsuit was filed, students and faculty members wondered what was happening behind the scenes.

The rumors started during battles for EvCC property between students, faculty, administrators, and board members. Information spread of the LRC construction and Index Hall destruction. Protests occurred and some instructors even shared emails from administrators about plans for the college to inform their students. The small property next to Starbucks was not a concern for anyone at EvCC.

In 2015, Everett Community College published its Master Plan of properties to acquire and utilize by the college. In this plan, the corner, now 1020 N Broadway occupied and owned by Koz on N Broadway, was shown as one of the properties to be acquired. Pat Sisneros, Vice President of College Services confirmed that “the property isn’t owned by the college” and based on tax documents, EvCC has never owned the property.

A lawsuit was filed in protest of the apartments being built on the property. EvCC believed that the apartments didn’t fit the college’s plan and lacked major components of student housing such as resident assistants, alcohol and marijuana policies, Title IX, and college campus regulations. The court found that EvCC originally supported the idea of having more student housing. The lawsuit was denied since the apartments took every step to become student housing that was legally required. The City of Everett Planning Department has required that KoZ on N Broadway house mostly students and report that the people renting the rooms are, in fact, taking classes.

In the first two years dorms opened, EvCC needed to “expend about $350,000 per year from other funds to cover the dorm expenses.” According to the lawsuit. EvCC claims that the college would not be able to afford to run more dorms and that the dorms are currently not making money. The dorms are an important part of any college, but EvCC has several million tied up in the learning resource center and other projects that are also changing the landscape of the college.

Not only has EvCC been in between several construction projects, but recently has not been filling dorms

due to COVID-19 and has changed Cedar Hall dorms to apartments for the remainder of the year. This could lead to more students and locals getting involved in living near campus than in prior years when dorms were made up of mostly international students. The college has a reported debt of 9 million dollars with nearly a quarter of that coming from dorms.

EvCC is experiencing financial problems with the dorms and this strategy could be beneficial to all parties involved. While apartments don’t offer the same opportunities as dorms, they add living space near campus and allow for less involved college students to take classes without a major lifestyle change.