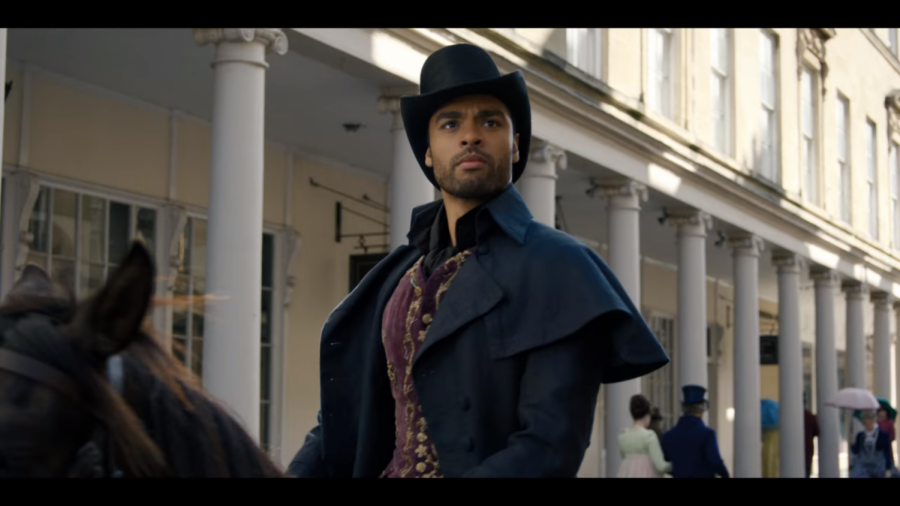 Listen, I know: I’m not Bridgerton’s target audience. I’m a four-eyed, pretentious man in his early twenties who has as much experience with romance novels as he has with actual romance: none. I’m writing this because I told my editor I would write a review on this popular new Netflix show called Bridgerton, and I intend to deliver on that. I’m in too deep. So with that disclaimer aside, let’s talk about cliques and cliches.

Bridgerton is a romantic historical drama set in Regency era London in 1813 and focuses on the eponymous noble family navigating the pit-of-powdered-wig-vipers that is the ton, or London’s high society. Specifically, we follow Daphne Bridgerton, the fourth child and eldest daughter, played by Phoebe Dynevor, as she navigates the courtship season. There’s plenty of splendid scenery to gawk at in this show- fabulous manors and luxurious balls, improbably sized wigs, gorgeous gardens. In the fifth or sixth episode, in particular, I was astounded by a shot panning upward to reveal the ceiling in the foyer of a massive castle. I audibly gasped, it was that beautiful of a shot. That alone made the show worth watching for me, but that doesn’t mean there weren’t things that made it difficult.

For one thing- and this may not bother some people- but this show is loaded with cliches. Dynevor’s main love interest, Simon Bassett (played by Rege-Jean Page) is a rather two-dimensional cookie cutter bad-boy with daddy issues who must be taught that he, too, is worthy of love. Page’s performance gives the character some charm, though, and the particularities of his childhood are somewhat interesting. The “will they or won’t they” loses its suspense when it’s clear from the get-go that they very much will, and I found myself saying “finally!” when they eventually did. That is until the show became what is essentially a montage of gratuitous, goofy sex scenes with soaring, melodramatic orchestral music laid over them. They’ve been praised for focusing equally on male and female pleasure- and rightly so- but I can’t get over the fact that they want me to take them really, really seriously, and I just can’t. Especially when a notorious scene in the show is handled so poorly, with some very unfortunate implications.

This one scene left me with an especially bad taste in my mouth- a taste made all the more bitter by the series’ explorations of sex positivity, the importance of consent, and the importance of sex education. I’ll try to say as much as I can without specific spoilers, but in one scene, a woman who deeply desires a child has sex with a man who does not. As he is nearing climax, the woman turns over and pins him to the bed, so that he cannot pull out, as he has done previously. She does this as he protests for her to stop.

This is rape. I should not have to explain why this is rape. Unfortunately, the show does not seem to treat it as such and prioritizes the woman’s distress over being lied to about the man’s infertility rather than the fact that he was literally raped, and does not deal with the consequences of this action. At best, it acts as if “they were both in the wrong” as though lies and rape were comparable in terms of harm done, and at worst it reinforces the idea that men cannot be victims of rape.

It’s a show that’s, in many ways, forward-thinking and progressive. Much has been made of the show’s racially diverse cast, a fact explained in-universe by the king marrying a black woman, and society subsequently treating black people (and I assume other people of color) as equals. It’s a shame that it’s tarnished by a poorly handled rape scene, nauseating cliches and an awkwardly paced plot. I honestly couldn’t recommend Bridgerton unless you’re a die-hard fan of the genre.