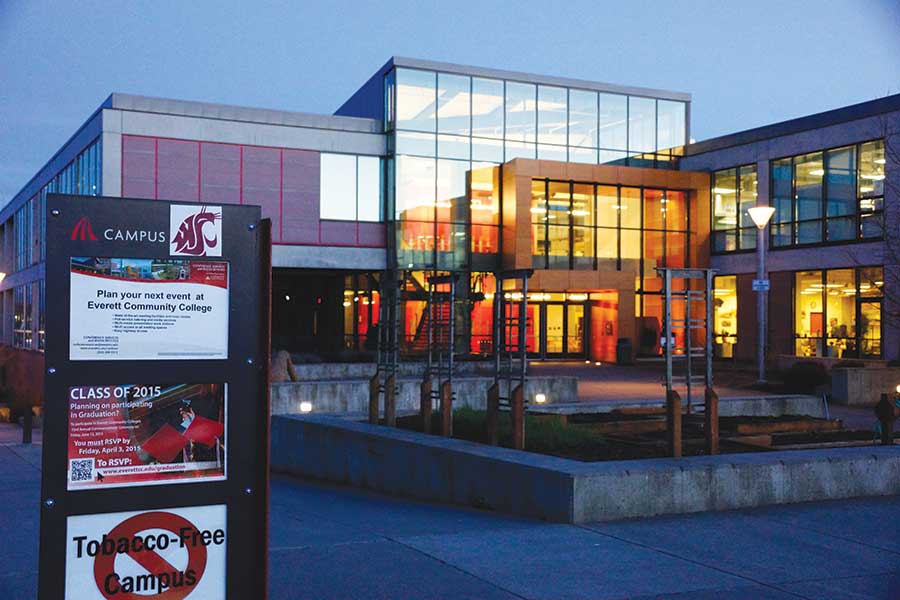 The combination of previous budget issues and the COVID-19 pandemic has led to a $9 million budget deficit and several layoffs at EvCC. The exact number of layoffs is unknown at this time. The school repeatedly has refused to share the information despite formal and informal requests from faculty, staff and The Clipper.
During a Trojan Talk last month, President Daria Willis fielded multiple questions about layoffs and when there would be an updated organization chart. She responded to both questions with varying versions of, “I won’t be releasing any information regarding layoffs, as it’s a personnel matter.” The Clipper’s formal public request for layoff information was entered on Oct. 20 and the school responded on Nov. 20 that they will not be releasing the requested information under advisement of the Assistant Attorney General’s Office.
Nina Benedetti of EvCC’s Transitional Studies Division and president of the Faculty Union said during the Board of Trustees meeting on Nov. 17, “We’ve found the number of faculty layoffs to be at 19%.” This number was determined by the Faculty Union by doing calculations with estimated numbers and has been unconfirmed by the EvCC administration.
Benedetti is concerned that the administration is failing to recognize the importance of faculty and the need for continuing to approve instructors for tenure. “Full-time faculty do all of the work outside of the classroom. When there’s fewer of us [faculty] that work doesn’t get done. Professional development opportunities to improve your classroom, to improve curriculum and to improve courses so they’re better for our students doesn’t happen when our numbers are so low.”
The sentiment was echoed by the president of EvCC’s Faculty Senate and math instructor Michael Nevins during his report to the board, “The faculty believe that hiring and retaining high-quality, full-time faculty is in the best interest of both students and the college as a whole.”
Despite recent layoffs the board did go forward with approving two full-time instructors for tenure at the Nov. 17 meeting.
An additional statement made by Nevins on behalf of the Faculty Senate was requesting the administration publish a new organizational chart, one that can be easily accessible to everyone at the college and regularly updated.

While the exact number of layoffs remains unknown, their impact on the campus experience is noticeable.
Students are able to see the effects of these layoffs in the time it takes to receive student services. For example, Classified Union president and Media Maintenance Technician Lead Max Phipps confirmed at least one layoff was in the financial aid department. Class schedules are being impacted as well. Two administrative assistants who help create the schedule have also been laid off according to Phipps and Benedetti. The work the administrative assistants did has not disappeared, but has instead been distributed among those already working full-time.
Student-teacher relationships are also being impacted, with the classroom caps raised from 25 students to 30. Trish Davies, vice president of the Faculty Union and Senior Associate Faculty in Transitional Studies said, “If an instructor has more students, that decreases the time available to serve each student. Grading may slow down, response time to emails and phone calls gets longer. Time for individual meetings with students becomes limited. At a time when communication is even more critical to student success, time for that to happen is reduced.”
Student program options being limited is another concern. Davies said, “With reductions in faculty, some classes may not be offered as often as before, or fewer sections will be offered. We have been told the college will make every effort to make sure this does not delay program completion for any students. How that will be carried out is unclear.”
Another fear that arose from the budget and pandemic is that EvCC will initiate the Reduction In Force or RIF process. This could allow entire programs to be eliminated. Benedetti stated Shoreline Community College has already started the RIF process, with classes within business technology, education and humanities being eliminated at Shoreline and will no longer be available after December 2020.
The layoffs have also caused labor disputes on campus. Phipps confirmed the union has filed grievances against the college.
The Classified Union alleges the school didn’t follow the contract procedures for layoffs, ignored seniority and targeted long time employees. Phipps believes the actions taken were not appropriate and is concerned with age discrimination based on who was laid off. “It’s not about the need to lay people off it’s about how they did it, and how they treated people when they did it.”
It’s unclear at this time if the layoff process is over at EvCC. Again, the administration is not discussing the matter on the advisement of the AAG. This has left staff and faculty feeling uncertain.
“Despite realizing we won’t all be gone soon, there is a collective sense of doom not just for those who will lose their beloved jobs, but how will things look a year from now,” said Davies.