The Show Must Go On – Zoom! 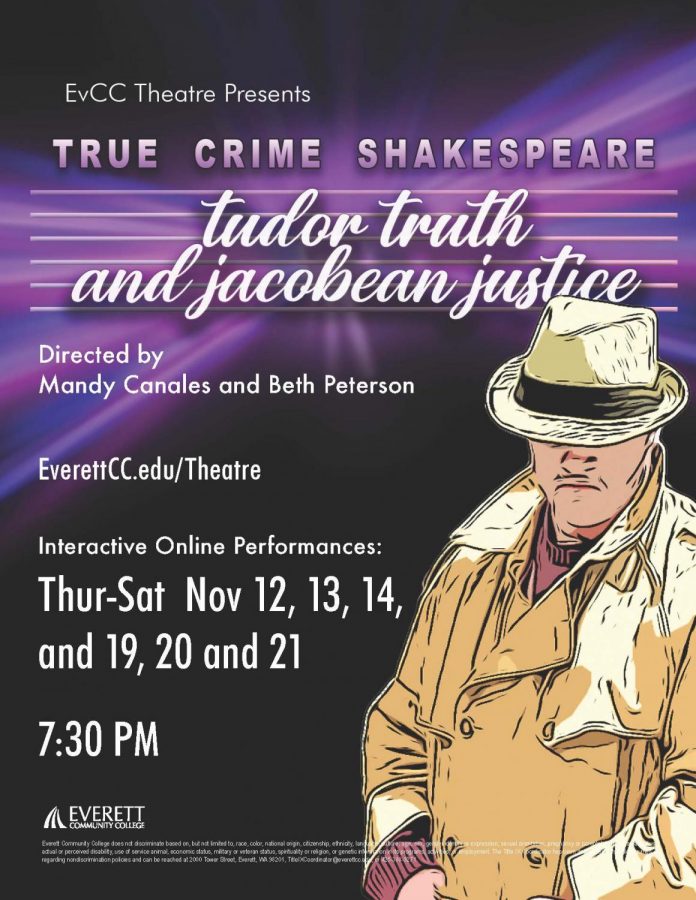 Since March, many of our lives are just a series of Zoom classes and watching movies with a borrowed Netflix password. It doesn’t need to be this way. EvCC’s drama department is still full steam ahead with their latest production, True Crime Shakespeare: Tudor Truth and Jacobean Justice.

The initial idea to adapt Macbeth came to Canales after seeing the play in London. Originally planned as a dateline news segment, Canales states it didn’t feel right for the Scottish general turned king’s reign at EvCC. Canales said, “It made more sense as a crime documentary than a dateline piece.”

For those familiar with Macbeth, you can see the logic in the change. There was a small problem: none of the cast had seen Unsolved Mysteries before. This absence of knowledge gave some of the cast difficulty imagining how the play would go. But a little binge-watching solved the problem. Garner said, “Once I saw the Son of Sam episode, it clicked. I got it.”

Even with the feel of the production set, you might ask, “How is the drama department going to pull off a play over Zoom when my teacher can’t even get a screen share to work?”

I have seen the rehearsal and it’s ingenious.

The play isn’t just a monitor full of actors like the opening credits to The Brady Bunch; there is a lot of coordination and planning with this production. The screens are coordinated only to show the actors in the scene, and backgrounds are set using the green screen feature in Zoom which the actors change between settings.

The cast isn’t only wearing different hats on the digital stage, but in production as well. According to Canales and Peterson, the actors came up with most of the script, and due to COVID-19 restrictions, the actors are running wardrobe, props and backgrounds as well. Actress Denton said, “Since we’re only seen from the chest up, costume changes are fast.” However, there are some downsides.

Even though the actors don’t have to deal with bumping into each other backstage while doing a full costume change, the cast and directors miss sharing the stage with fellow actors. Ogle stated, “It’s hard to do movement and connect with the other actors.”

The lack of connections and awareness of movement can lead to continuity errors, something the performers are well aware of. Northrop explains,” Keeping track of placement is important. I need to make sure I’m grabbing something from the right side of the screen if another character is handing me something.”

At some point over the last eight months, many of us have been in a Zoom class where a student or teacher froze or their audio stuttered from buffering. Even worse, the host lost their connection altogether. Directors Canales and Peterson are aware that these things could happen, but luckily so does the audience.

Canales said, “We think the audience will be understanding if there is a technical problem.” Both directors express confidence in the system; with no glitches during the rehearsal, things look good.

Zoom isn’t the ideal setting for an actor used to the stage; Denton said she found it jarring. Most of the actors expressed trepidation and even terror at the idea of taking Shakespeare to Zoom, but they certainly don’t show it during rehearsal.

The special effects, stage -or screen choreography and the backgrounds were executed as planned. The actors slipped between characters like fleeting shadows, which you will see during the in-character Q&A session as the EvCC theater department brings Shakespeare into the 21st century.

Correction: An earlier version of this story had Canales seeing the play in London presented as a dateline news story.