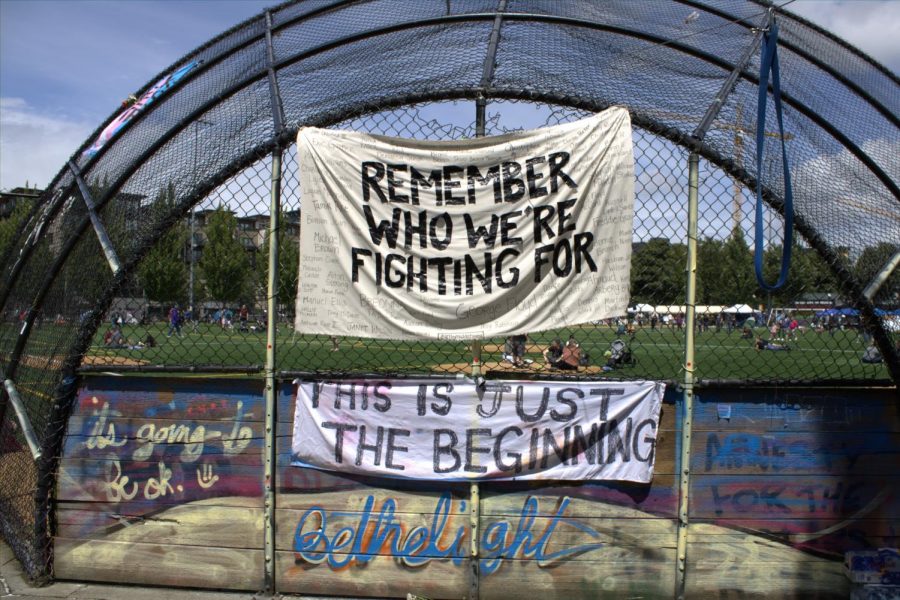 Banners reading "Remember Who We Are Fighting For" and "This Is Just The Beginning" are hung at Cal Anderson Park in the area of the Capitol Hill Occupied Protest (CHOP).

The people occupying the Capitol Hill Autonomous Zone (CHAZ) in Seattle are prepared to stay for a while and have begun creating their own community co-op program. Gardens are being planted, food is being donated, medical teams are established and peacekeeping agents have been patrolling the streets.

The demonstrators in CHAZ have asked for the zone to be called Capitol Hill Occupied Protest (CHOP), in order to fit better with the goals of the movement. Agitators to the zone are few and far in between, though some have come with different goals or values in mind. As diverse as the many cultures of the Pacific Northwest can be, people have found some common ground in the cop-free zone.

The “Conversation Café” was established as a place to speak freely with others about racism and how to resolve those conflicts in society. Next door is a hot dog stand that consistently holds a line of patrons. There is also free food available, though community members have asked for donations whenever possible to replenish the supply.

What the end results will be, one might be wondering. At this point, the only thing for certain is that the majority of visitors are enjoying the “festival-like” atmosphere and several were actively engaging in conversations about race and discrimination. Many visitors were seen donning cameras and spent most of their time capturing footage. It seemed that some were perhaps visiting simply for the spectacle of it all and journalists were plentiful. When an unwanted patron found himself a contender against a group of activists, most of the crowd stood back and filmed. Not many wanted to get involved in resolving acts of aggression, understandably; however, with differences of opinion, there is bound to be conflict. Demonstrators staying in CHOP wish for a peaceful outcome, with many volunteering their time and talents in working toward a common goal. The peacekeeping agents and medic teams appeared to be keeping busy.

An individual broke a window near the front entrance of Seattle Police Department’s East Precinct at 12:25 p.m. on June 13, 2020. An eyewitness was so distraught over the incident that she was unable to provide many details of the suspect. Nobody in the crowd was injured and the suspect escaped. When the police have abandoned their own establishment and someone destroys their property or disturbs the peace, who can be called? Certainly not the police at this point.