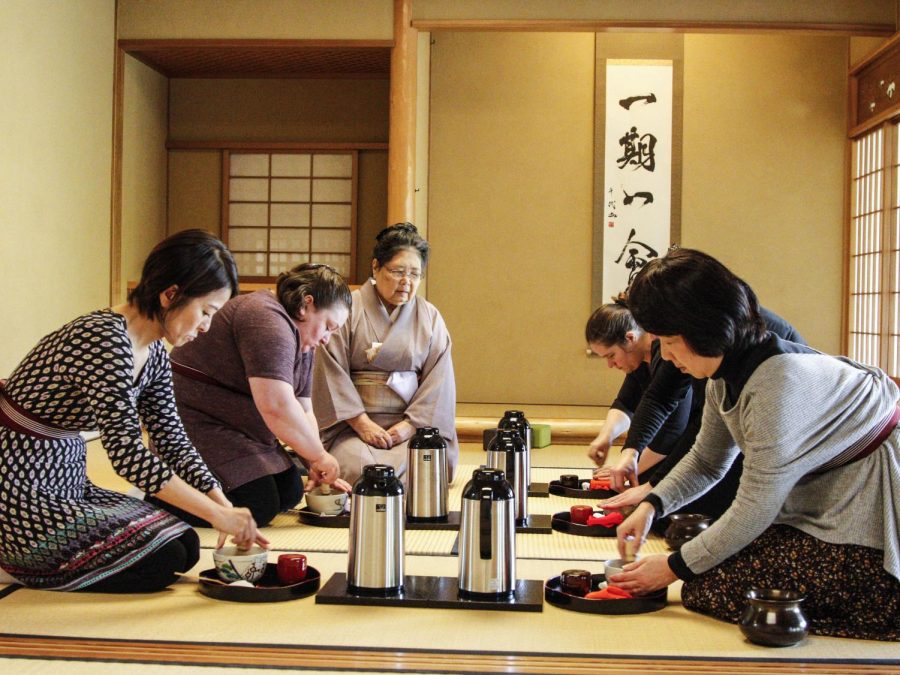 To experience other cultures firsthand, one usually must travel far and wide. It is not often that opportunities for intercultural exchange present themselves in one’s backyard. Yet, to visit a traditional Japanese garden and tea room, and to inquire more about Japanese culture, one does not need to travel further than the Nippon Business Institute (NBI) on EvCC’s main campus.

Founded in 1987, the NBI’s mission has been to “bridge the cultural gap which exists between eastern and western cultures, with a primary focus on Japan” according to their page on the EvCC website. Miki Aspree, the current director of the NBI, describes it as “basically a cultural resource center. We provide cultural sharing to community members, our college campus and maybe American students learning Japanese.” She explains that they “promote Japanese language, culture and history. American students might want to study in Japan, and so we give resources.”

EvCC librarian and Japanese Culture Club advisor Heather Jean Uhl further explains the focus of the NBI by saying, “Community colleges, being all about community education, that link was forged with the NBI. But now, 40 years later, that is starting to evolve. Business is less the priority and more the priority is intercultural exchange… Particularly because we have such strong ties in the Pacific Northwest to Japan, it makes sense to have a cultural resource center that is so deeply invested in the Japanese community.”

One of the many elements of Japanese culture that is practiced at the NBI is “chado” or “the way of tea.” Uhl shares that she writes grants every year with funds provided by the EvCC Foundation that allow them to study chado. “The way of tea is an ancient tradition that actually came from China, through Korea, into Japan,” says Uhl.

It is essentially an ancient practice of preparing and serving a satisfying bowl of tea to one’s guests. The style of chado that is practiced through the NBI is the Urasenke style. Uhl states that “Urasenke style is internationalized. It’s very much about reaching out to the entire world to promote peace and equality through a bowl of tea shared between two individuals or a group of individuals.”

Beyond the Japanese garden, adjoined to the NBI is a 14-mat tatami room. Tatami are woven mats that are traditionally knelt on while practicing chado. Uhl shares that the NBI’s tea room is something special. “Most tea rooms only have two mats… For a tea room to be that large, there is nothing like it on the west coast. It is that much more unique in its ability to seat upwards of 20 people,” said Uhl. It is in this tatami room that chado lessons and demonstrations take place.

Former EvCC student Elizabeth Higgins has been studying chado through the NBI for five years. There is a phrase that often coincides with chado, “ichi-go, ichi-e”, which basically means “one time, one meeting.” Higgins explains the meaning that this phrase has in her own life. “One moment, one time, never comes back again. Remembering that throughout my daily life, to appreciate the little things, because you never know when that [moment] might end or change.”

Practicing chado can be a meditative experience for most. Uhl shares that “it allows you to have a heightened mindfulness and the students rave about how they love tea because it makes them feel relaxed and centered in a way that I don’t think we are permitted in our current culture.” Tea student Jessica Webb explains that “[chado] helps me be patient, and take a deep breath and calm down.”

The tea master behind these lessons is Masaye Nakagawa, who has been studying tea since 1981. Chado is not a simple practice to be learned overnight. Nakagawa explains that “to learn it well, [it would take] maybe a year… They say that the average [amount of time] to get your tea name is between 10 and 15 years.”

Nakagawa not only teaches chado through the NBI but offers lessons at the Seattle Art Museum as well as providing various demonstrations at Sakura Con every year. She also performs stage shows on cruise ships where she teaches about tea and other Japanese traditions.

At this point, chado lessons through the NBI are not open to everyone. Uhl explains that they “give first priority to Japanese Culture Club students and Japanese language students, just because a lot of the tea sessions that we offer to the community are often fundraisers that come back to the club… But the goal is to maybe offer a credited class so that students could actually enroll and receive credit for this amazing study.”

The NBI has a community event tentatively planned for May 31 where they are hoping to have two seatings open to the public. This event would consist of a guided garden tour and experiencing a high-level student perform a tea procedure, though the event is not set in stone yet.

On any given day, the NBI is open during regular school hours. Though the tea room is usually off limits, the Japanese garden adjoined to the NBI is completely open to the public when EvCC classes are in session.