Students and staff discuss the accuracy of the popular website, Rate My Professors. 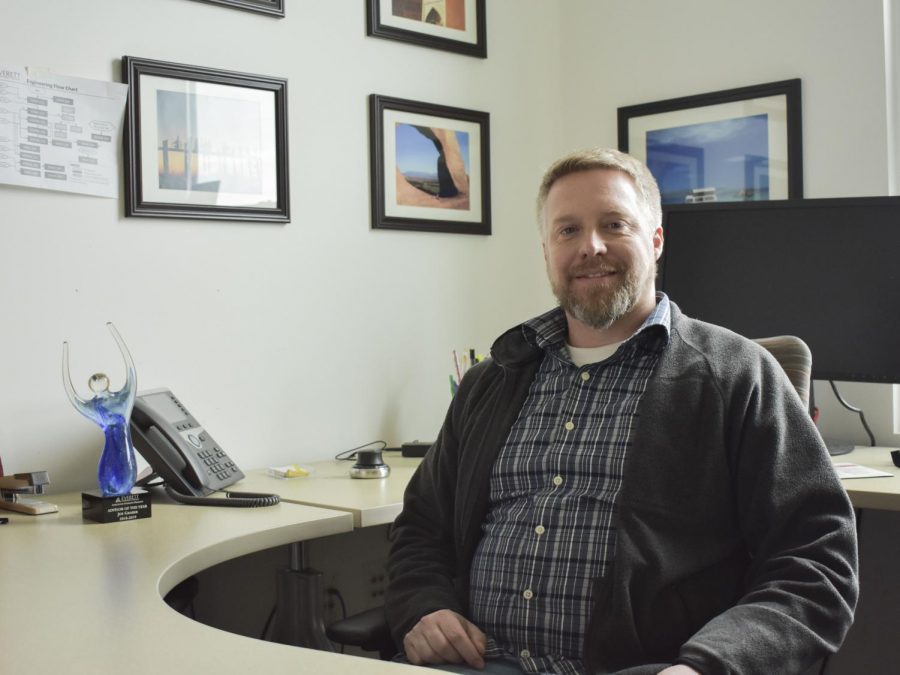 Joe Graber, an engineering professor, in his office at Whitehorse Hall on Feb. 25.

There are numerous different ways to approach teaching and those ways are being rated.

Founded in 1999, Rate My Professors is a website that allows students across the United States, Canada and the United Kingdom to assign ratings to their professors. Many students and instructors are aware of the process and idea behind the website and have varying opinions on it.

Billy Phillips, an EvCC English professor, appreciates that there is a space for students to have a voice through Rate My Professors. He emphasizes his belief in student advocacy and holding teachers accountable.

“The only way for students to really own their education, which is what we’re always saying they should be doing, is if they have a voice and if that voice has some level of consequence,” says Phillips in regard to Rate My Professors.

EvCC yoga instructor Beverly Anderson finds the “different perspectives” that the ratings offer to be interesting.

She compares them to movie ratings saying, “I can go to a movie and maybe it didn’t get the ratings I would have given it and vice versa; some movies have great ratings but it’s not my style.”

While Anderson said she felt “honored” to be rated highly, she also said she takes it with a grain of salt. “I think anything of an opinion or review based idea, it has value and I think we check it out and it’s all personal opinion and everyone has such varying perspectives,” she added.

“There are studies that show humans are 10 times as likely to share negative experiences as they are positive experiences. A lot of times people will end up getting upset and sharing their frustrations on something like Rate My Professor,” explained Graber.

Steven Grupp, a geology professor, shares in Graber’s concern over negative comments saying, “I guess my concern with online things is you tend to get the people who are mad at you. Does that really help you? Do they have an ax to grind? You don’t know what they’re talking about when they complain.”

Negative reviews are not the only problem that Graber has with the website, it’s also about quantity or lack thereof. “There’s not enough people. In eight years I’ve taught if you just say roughly 75 [students] a quarter times three. We’re talking about quite a few, two thousand or so students I’ve taught and 14 have decided to share,” Graber explains.

Students shared similarly mixed reviews with some appreciating the information provided and others harboring concerns over accuracy. “I think Rate My Professor is pretty reliable,” says EvCC student Lin Lim, “I think it gives a good reference.”

EvCC student Letitia Whitaker echoed Grupp’s concerns over emotionally charged reviews saying, “Some people you can tell that they’re just writing about their feelings and some actually give you the content of the class. It’s kinda 50-50.”

Some students who want a more reliable source than an anonymous website where anyone can post prefer asking friends or classmates for their professor recommendations.

“I talk to other students beforehand, because they are more realistic and I tend to believe people that I can actually see,” says Whitaker.

At the end of the day, not every rating on Rate My Professors is precise and not every professor is the right fit for any given student.

“Some teachers you’re going to resonate with and some you are not,” says Anderson, “it’s just reality.