Women’s Equality: 100 Years in the Making 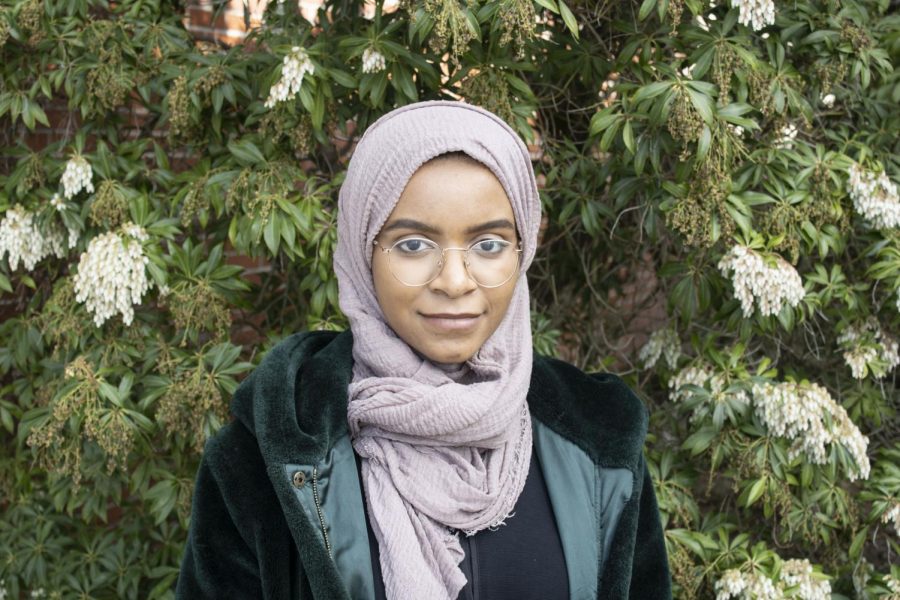 BRIDGES President Ruqaiyah Alaji outside of Olympus Hall on Feb. 26, 2020.

It’s Mar. 3, 1913; live music echoes through Pennsylvania Avenue as a parade of suffragists march from the Capitol demanding liberty for women. The inauguration of President Woodrow Wilson is tomorrow. Seven years later, he’ll sign the amendment granting American women the right to vote.

International Women’s Day is celebrated on Mar. 8, as a global celebration of women’s achievements throughout history and a call for equality. A common misconception is that promoting specific demographics is one-sided and unnecessary.

A century after the 19th amendment’s passing, discrimination, microaggression and stereotyping still affect women’s lives. Women-oriented groups at EvCC provide community, mentorship and lines of communication to address these issues.

Dr. Graham described AAWCC as “a personal and professional development organization for women employees.” She said the association provides a “safe-space” for addressing issues that impact women. The group discusses discrimination, microaggression, self-advocation and mentorship among members.

According to Dr. Graham, microaggressions are slights made based on race, gender, sexual orientation or any aspects of one’s identity. Being a female of color, she has dealt with microaggressions based on both her race and gender.

“You’re too assertive,” she said is a comment made towards women, “when we attempt to dominate a conversation, or speak-up or advocate for ourselves.” The problem with that comment, she said, is that it wouldn’t be made towards a male in the same role.

She mentioned how the public views leaders based on gender saying, “we don’t look at a male in a leadership role the same way as a female.” Dr. Graham said that until society views leadership in the exact same way, regardless of gender, these groups are still necessary. “The purpose of these groups is to advance the status of women,” she said, “that’s not something we’ve done as a society,” said Graham.

Dr. Graham advises women dealing with microaggression to find “a tribe,” or support network. “[AAWCC] brings us into the same room and puts us all on an equal, level playing field, so that we can all learn from each other,” she added.

EvCC’s Society of Women Engineers has a similar goal. Kristine Washburn, the club’s advisor, said their objective is to create a community for women in STEM.

Washburn said women in the workforce face hidden-biases, off-handed remarks and unwanted sexual advances. “Just like abolishing slavery didn’t end racism,” she said, “affirmative action didn’t end sexism.” She mentioned her own experience of being solicited for sex by a male colleague while at work.

Washburn brought up that toxic-masculinity isn’t always so overt. Having a community of women can help identify what should and shouldn’t be accepted in a workspace.

The Association for Women in Communications (AWC) at WSU is open to EvCC students as well. The club is designed to link its current and former members through mentorship and networking. “We would be able to reach back and extend our hand and help each other out,” said Julia Smiljanic, the club’s vice-president.

Smiljanic said AWC’s goal is to start conversations about issues that women face. “Everyone needs to be involved in those conversations for there to be effective change,” she said. Which is why the club also accepts male students. “Ultimately there’s a role for everyone to play,” she added, “regardless of gender.”

Women-empowerment groups are important because “there’s still so far to go,” Smiljanic said, “it’s just about not being complacent with where we are now.”

As a Muslim woman in the U.S., BRIDGES President Ruqaiyah Alaji said people assume she’s oppressed because she wears a hijab. “I show pride by actually putting myself out there,” she said, “while also choosing to practice my religion and wearing my hijab.” Alaji wants to break those stereotypes. “Not every Muslim woman is oppressed,” she said.

According to Alaji, this assumption is gender-based discrimination because people assume her beliefs are forced on her. “Just the assumption that in my personal religion,” she said, “I’m oppressed as a woman, and that males are not oppressed.”

International student Mirei Maejima has dealt with gender-based insults back in Japan.

She’s been slighted on her intelligence. “You’re a woman,” she said, “so you don’t know anything.”

Maejima is the vice-president of leadership for EvCC’s chapter of Phi Theta Kappa, an international honors society, and a member of its All-Washington Academic Team.

In Japan, everyone’s cellphone makes a shutter noise when capturing a photo. This is because predators would secretly take pictures up women’s skirts.

The sound requirement is just one way that Japan’s culture towards sexual misconduct is evolving. According to Maejima, Japan is cracking down. “Before if [a predator would] take a picture or grab you,” she said, “then you can’t report it.” Now women can report unwanted touching and lingering glances, she said it’s empowering women to speak up.

The 1913 Woman Suffrage Parade catapulted the advancement of women in America. Nowadays, women vote in each election but equality in society is still around the corner. Women-empowerment groups and communities can help bound those hurdles.