Travel During An Outbreak: How The Wuhan Coronavirus is Impacting Travelers

Amidst the Novel Coronavirus outbreak, travelers voice their concerns over airport and airline safety. 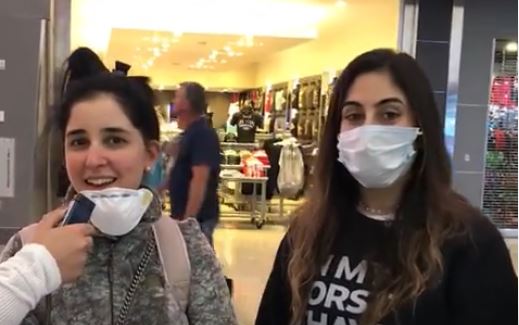 As of Mar. 2, 2020, there are 88,948 confirmed cases of novel coronavirus around the world according to the World Health Organization (WHO). The WHO reported 3,043 cases have resulted in death from what is now being called COVID-19. Washington State Department of Health has reported one death in Snohomish County and five deaths in King County.

The first confirmed case of COVID-19 in the United States was at Providence Regional Medical Center in Everett, less than one mile from EvCC’s main campus. The Snohomish county resident came down with symptoms shortly after returning from a trip to Wuhan, China. Considering the impact that air travel has on spreading illness, travelers chimed in at McCarran International Airport in Las Vegas on what they were experiencing.

Trade show season is in full swing in Las Vegas. It is the time of year when many trade shows and conferences take place, in preparation for spring and summer sales. A city known for its constant entertainment and being a hub for international business and leisurely travel, Las Vegas is starting to feel the impact of the new virus. The Magic Fashion Show, which took place Feb. 3 – 7, was absent of Chinese vendors due to the travel bans. The Lunar New Year celebrations also saw smaller than usual crowds.

“I think everyone is concerned, but we carry on, don’t we?” said England resident Susan Purkis, who was waiting for a flight home on Feb. 7 with her husband, Andy.

Concerns over racial discrimination have been circulating through several news outlets including the Washington Post, British Broadcasting Corporation (BBC), and Australian Broadcasting Company (ABC) since January.

“When it becomes a racist type [situation], because you see a Chinese person you [might] stay away from them. Whether they’re Japanese or Thai, whatever; or they could be American, but you keep away from them because you may think they’ve got it. That’s the problem you have with this kind of virus,” said England resident Andy Purkis.

Returning to Seattle with his wife, Bill Mickey said, “We talk about it often just because it is alarming, obviously; and [my wife] grew up in Japan, so it was very common to wear masks so that doesn’t really startle us at all. Just everything you hear on the news, everywhere you go it’s the hot topic. So, we are a little concerned.”

According to data provided by international news organization, Reuters, the rate at which the virus is growing has far exceeded that of Severe Acute Respiratory Syndrome (SARS) and Middle East Respiratory Syndrome (MERS). To compare in numbers, SARS took about eight months to infect 8,098 and MERS took 12 months to infect 108 people. According to disease experts, it will take more time to understand the true rate of growth, considering that not all infected are currently seeking treatment and the incubation period is up to 14 days.

The potential of the continued outbreak in the United States is unclear; however the WHO released a statement on their website which in part reads, “As the current outbreak of the Coronavirus Disease (COVID-19) continues to develop, the World Health Organization (WHO) and the World Tourism Organization (UNWTO) are committed to working together in guiding the travel and tourism sectors’ response to COVID-19.”

The novel coronavirus has spread to at least 46 countries and territories, according to Reuters. It is on the minds of travelers, but those visiting can only hope that what happens in Vegas will stay there and not follow them home.

The CDC recommends frequent hand washing with soap and water, avoiding close contact with sick people, avoiding travel when sick and seeking medical help if symptoms arise. Symptoms for the virus can be similar to the common cold, such as fever, chills, cough, sore throat and difficulty breathing. For more information, go to https://www.cdc.gov/coronavirus/index.html

In an email to EvCC students on Mar. 1, 2020, EvCC President Dr. Daria Willis wrote, “EvCC continues to maintain normal operations at this time. But we are preparing so that we will be ready to take fast action if needed. Everyone’s health and safety is our highest priority.”