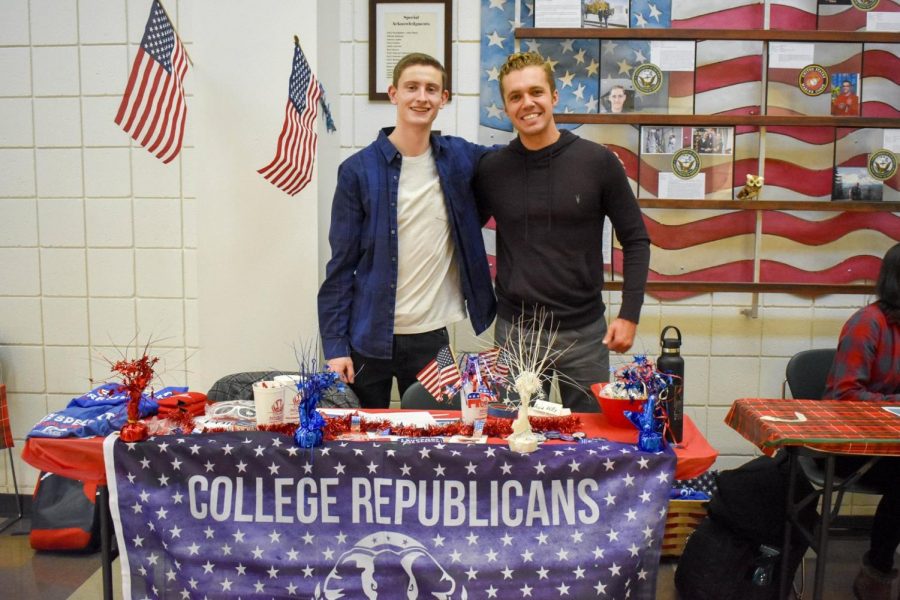 Walking through the EvCC halls, I noticed a sign for the College Republicans club that read, “On a scale from one to America, how free are you on Wednesdays from 3-4 PM?”

This prompted me to wonder how I, a fat liberal bisexual woman, would be received if I attended such a meeting. Because of my identity, my past interactions with Republicans have been less than ideal. It usually ended with the person calling me a gay slur and sending me to my room because he’s my dad.

However, I am a strong advocate of having an open dialogue between the political parties, especially following the divisive 2016 election. In our emails, the College Republicans president Josiah Reiser agreed with me.

“We, as a country, need to get back to respecting other people’s opinions, no matter how much we hate them or they offend us, and get back to finding the middle ground/making compromises,” Reiser said.

By Wednesday, I was so worried that I nervous peed twice before the meeting. I first met Reiser face-to-face while he was holding a box of doughnuts. He told me the doughnuts would be shared at the meeting.

However, by the time the meeting began Reiser and Vice President Bret Benzion were the only members in attendance. “Very popular we are on this campus,” Benzion joked.

In our previous email correspondence Reiser touched on this unpopularity saying, “It is specifically hard to be a Republican in a Democrat state when there is so much hate from the opposing side and you are in the minority.”

According to the 2014 Campus Climate Survey conducted by The Office of Institutional Research at EvCC, 8% of students encountered harassment because of their views on politics or other social issues.

The meeting opened with the Pledge of Allegiance, a prayer and a doughnut. Then they dove into a discussion about the role of government. According to Benzion, the government’s sense of justice should be intertwined with Christianity. “To know what justice is, is to go back to where it comes from, which is God,” Reiser agreed.

Benzion referred to this as the difference between positive law and natural law. He jokingly said if he were an atheist it would simplify the internal conflict.

Around the 30 minute-mark, club member Johanna Schmidt joined the meeting, officially increasing the female population in the room to two. Reiser asked the room to define liberty, to which Schmidt replied, “Freedom to do what one pleases without hurting those around them.”

Benzion questioned her definition, saying that not all legal offenses harm others. “Like, gay marriage is a victimless crime,” Benzion said.

“Although there are STDs,” said Schmidt.

To that, I decided to chime in. “You can get STDs when you’re straight too.”

“Well, that comes down to one partner or multiple,” said Reiser.

I was confused as to why that same reasoning was not applied to gay people contracting sexual diseases. In 2011, when Lady Gaga said the gay community was “Born This Way” I don’t think she meant we were born with chlamydia.

As the meeting closed my political opinions remained the same, but I had a better understanding of the mindset from which Republican views are formed. The members thanked me for spotlighting the club and my willingness to listen.

I can say with complete honesty that despite our political differences, the club was welcoming and treated me with respect and kindness. There are people behind the politics, and understanding each other’s humanity is the first step in resolution. However, that is probably not going to stop me from having a wife and three bulldogs.

The clubs on campus are open to all, regardless of political alignment. If you are interested in attending a College Republicans meeting, they are held on Wednesdays at 3 p.m. For more information, contact [email protected]