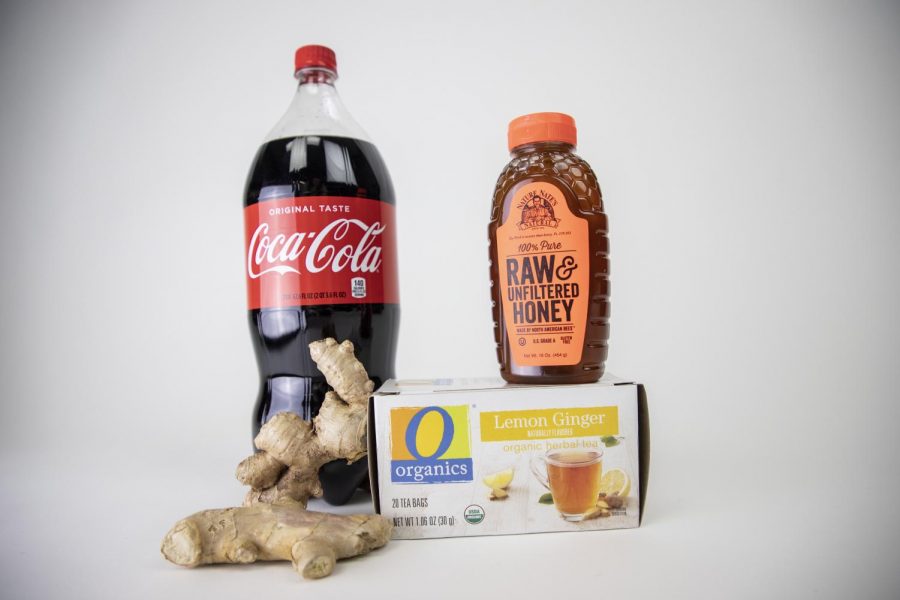 Ginger cola and ginger tea with honey are common home remedies in China for the flu.

Winter is a season of frequent colds. For international students living alone, getting sick can be a very serious matter. Instead of running to the pharmacy to read about side effects on the back of a box of cold medicine, many international students turn to the comfort of the cold remedies that they grew up with.

Ginger cola for colds is not a recipe, but in the winter months many restaurants in China offer just such a drink. The memory of this can evoke a sense of homesickness for anyone that grew up drinking it to help their colds.

Rachel Zhang from China explains how to make this unique drink: “Put two or three ginger slices in about 300 milliliters of cola [and] cook together. Turn off the heat when it is boiled, or near boiling, and serve.”

Ginger is a common ingredient that most Asian students mentioned for their go-to cold remedies. “My mom usually makes me drink raw ginger with water, or at least ginger tea to relieve my stuffy nose or coughing,” said Jessica Nguyen, an EvCC student from Vietnam. “She sometimes boils bean sprouts and makes me drink that broth.”

Sihoo Lee, an EvCC student from South Korea said, “Ginger tea with honey is one of the most traditional ways to prevent colds. Just smashed ginger and put hot water with honey.” Lee likes to spend time with friends in the cafe, one of the most convenient ways to buy a jar of ready-made ginger honey tea in the food mart.

Grace Setiawan, an EvCC student, recommends a traditional Indonesian food called “Jamu.” Jamu is a traditional herbal medicine, predominantly made from natural ingredients including roots, bark, flowers, seeds, leaves and fruits. “Turmeric and ginger jamu,” said Setiawan, “my mom buys it for me from those old ladies in markets.”

Another ginger remedy recipe is Ginger Tea with brown sugar. Brown sugar has a strong sweet flavor, which can dispel the spiciness of ginger. Enjoy a cup of hot ginger tea with brown sugar in cold weather. A warm current will enter the stomach along the throat, and the body will sweat slightly.

To make this at home, wash 100 grams of ginger and cut into small pieces. Stir fry ginger pieces for two minutes and pour into hot water, then boil for about 10 minutes. Add 150 grams of brown sugar to water, then cool and filter before serving. The ratio of sugar to water can be adjusted to personal taste.

But not everyone reaches for the ginger when they feel a cold coming on. Tingxuan from Taiwan prefers to eat cactus, or tincture, to treat a cough.

Chicken soup is Wurood Alrthwi’s, an EvCC student from Iraq, go-to cold food. “Chicken cooked with onions, calabash and other vegetables, which is the most healing I think. But I don’t know how to cook,” she says. When showing a picture of the recipe she said with a smile, “Yes, like this. Grandma’s chicken soup.”

Everyone has different ways to prevent seasonal colds, and many of them come from home remedies that they grew up with. “I don’t like antibiotics to treat the flu. I usually let my immune system do its job,” said Nguyen, “If I have to choose between the two, I would prefer treating my flu with food therapy.”