Sustainability Projects Made Possible by the Green Fee

Student proposals for sustainability projects are now being reviewed with the possibility of being implemented on campus using Green Fee funds. 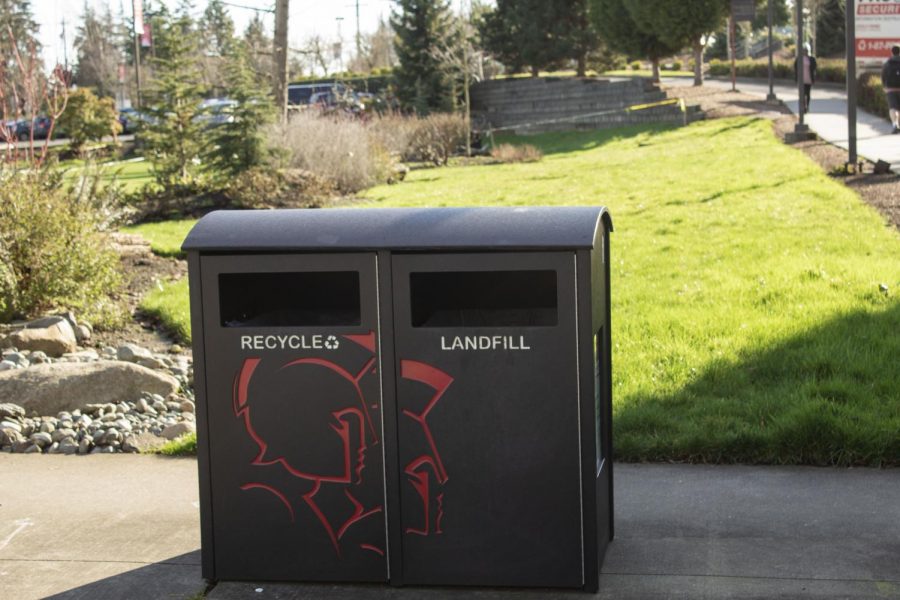 Recycle and landfill waste bins can be located throughout EvCC campus.

Molly Beeman, EvCC’s Sustainability and Space Manager, writes in a post from the EvCC Sustainability blog that the student Green Fee budget was approved by the ASB senate back in June for the 2019-2020 school year “and a large part of the budget has been set aside for student led sustainable projects.”

“The college should be responsible for emissions it creates and take steps to ensure mitigation of such emissions wherever possible” says Beeman.

In 2018, a vote took place among EvCC students in which the majority voted yes in approval of a student Green Fee taken in the form of a .50 cent per credit tax when students pay for their classes. The idea behind this being that the fees collected would be used to fund projects proposed by students to make the EvCC campus more sustainable and environmentally friendly.  This is the first year that the campus will be utilizing these funds.

The Green Fee Committee began accepting proposals for the first time ever at the beginning of January allowing the voices of students who strive to implement their own ideas to make the campus more sustainable be heard.

“Excitingly enough, we have received some proposals! Now that the deadline has passed, the next step is for the Green Fee Committee to review the proposals we have received” says EvCC Sustainability Officer, Annali Kangas.

According to Kangas, ideas currently being reviewed by the Green Fee Committee include: another campus greenhouse, replacing some of the campus water fountains with water bottle filling stations, and renewing licensing and adding additional sensors to monitor water temperatures around the bay area for ORCA.

Beeman and the sustainability team have demonstrated a number of sustainable projects on campus including the campus recycling and composting programs, the existing water bottle filling stations, and solar panels which are located on top of Liberty Hall. “I think the Green Fee and its resulting projects around campus will increase the visibility of sustainability on campus.”

A list of project examples for potential ideas can be found on the college website. Visit the sustainability blog featuring the latest updates and events regarding all things sustainable on campus.