This edition of Clipper Rewind highlights past EvCC events like Black History Month, Super Tuesday and the construction of a swimming pool. 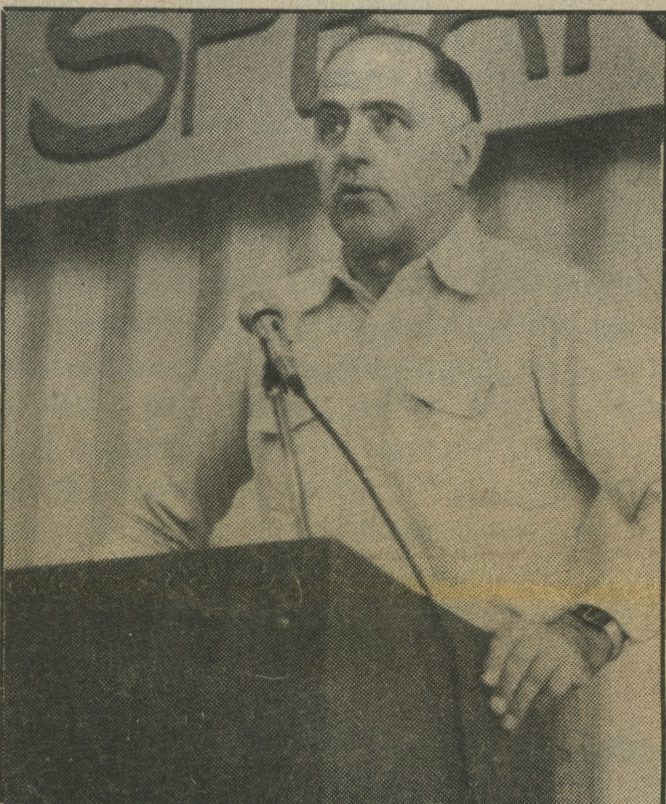 George Herrman, EvCC Woodshop instructor and Korean War veteran speaks about the draft at the "Speak Out" event held on Feb. 27, 1981.

Everett Community College has a rich history of celebrating events. Nearly every month there is something planned for students to go to and celebrate. February, is Black History Month – marked on the school calendar by Black Student Unions’s (BSU) Ebony Gala. Super Tuesday kicks off March, and by this time hopefully the snow is long gone.

Black History Month: Feb. 1974
February is Black History Month, and Everett Community College’s Black Student Union (BSU) has events planned to celebrate the occasion, more details on the campus calendar. BSU has been a club for over 45 years, and one of the most influential BSU presidents worked with The Clipper to get more people involved in March of 1974. “BSU isn’t functioning to my expectations,” said Joe Lindsay in the 1974 The Clipper article. “I’ve tried every approach, but there’re just no numbers.” Joe realized that people on campus were ‘very much divided’ on campus and used the power of the school paper to make that known. “Ask most people what they know about the BSU and they generally say, ‘They’re the ones who sponsored that dance, right.’ ‘There’re more important things than dances,’ Joe said, adding that he wished he could get participation in the BSU such as they get at dances.”  In 1974 The Clipper took ‘Letters to The Editor’ and February of that same year Joe sent a letter thanking students who came to the dances and inviting them to all future events. “The BSU members are very pleased with the tremendous turnout on the part of the students, and wish to thank everyone for the part they played in making the two dances a success.” Says the beginning of the letter, “Once again BSU would like to thank all of those who came and invites everyone to their activities in the future. Thank you” ends the letter. And at the bottom: “J. Lindsay – BSU Pres.”

Super Tuesday: March 1981
Super Tuesday will be Tuesday March 3rd, 2020. Super Tuesday is a political event when most states will have voted and whoever is leading in the polls by Super Tuesday generally wins nomination by their party. Leading up to Super Tuesday in 1981 EvCC held a “Speak Out” debate on the draft to help express student opinion on politics at the time. “Speak Out’ was created by Shon Ramsey, 1st Position Representative, and Grant, Settie, EvCC Student. The program was designed to enlighten EvCC students on controversial issues, such as the draft.” Says the Feb. 27, 1981 Clipper article. “Herrmann, an EvCC carpentry instructor and Korean War veteran, received about a dozen raised hands in response to his opening question.” Starting off the debate was the for-draft view, although there was a student who disagreed. “Siminski countered Herrmann by asking how people really were for the draft.” The Clipper summarizes the debate with two concise sentences. “The questions were debated by the two, and most were answered to the crowd’s satisfaction. The two disagreed on many points, but both agreed the draft was unfair, and needed to be changed.” The Clipper article goes on to say that the creators of the “Speak Out” felt it was a success and plan to host future public conversations.

In 1961, Everett Community College was a junior college just beginning to be built. Some of the projects that were planned were the addition of classrooms and a swimming pool to the campus Physical Education Building. George Tuefel Co. won the job with the lowest bid in February of  1961. Completion was promised within 285 days. With the job costing $393,000 and total costs at $621,361, the plan for the pool was set. By Oct. 27, 1961 the pool had been installed and the project was set to be completed by January of 1962. On Jan. 26, 1962, the first ‘Splash-Hop’ was held to celebrate the pool’s opening. “There’ll be splish’n splash’n, rock’n and roll’n tonight when AMS sponsors the first ‘Splash Hop’ at the newly completed pool in Troy’s sports palace.” Says the 1962 article. “The AAU (Amateur Athletic Union) size pool, 42 by 75 feet, ranges in depth from 3.5 feet at the east end to 12 feet at the west end. High and low boards are at the west end.” EvCC no longer has a swimming pool.The building where the Physical Education Center was in 1962 is now Seattle Children’s North Clinic.