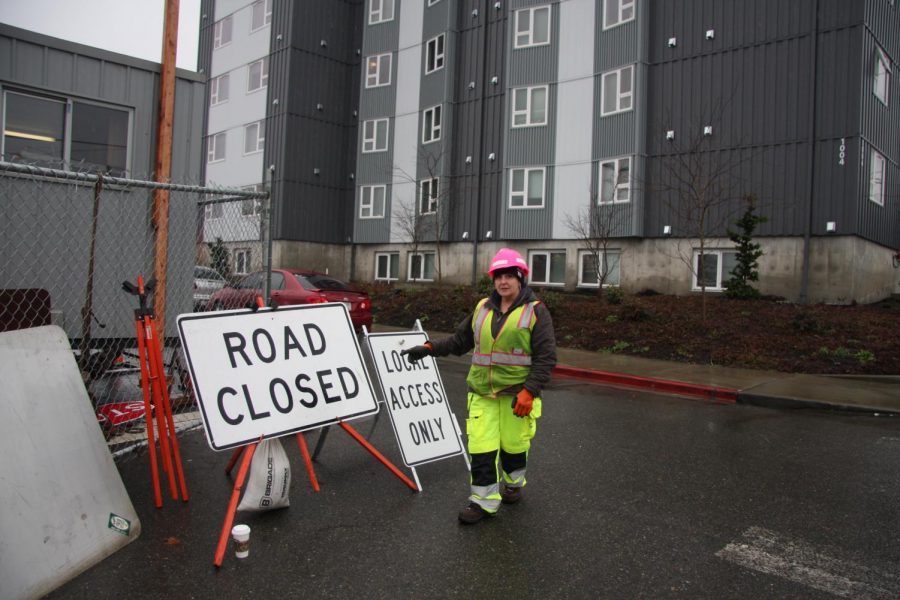 Construction worker, Carol Crane, describing the accident that occurred in front of the Mountain View dorms on Wednesday, Feb. 5.

Just before 9:45 a.m. this morning EvCC student, Lakeithia Sakin was involved in a vehicular hit and run just outside of the Mountain View dorms on the intersection of 10th street and Broadway. Sakin was taken via ambulance to be treated for a non-life threatening injury to her foot.

Sakin is a member of the African Diaspora Club, works as a resident assistant in the campus dorm and is also a staff writer for The Clipper.

According to Everett Police Department (EPD) Public Information Officer, Aaron Snell, both the Everett Fire Department and EPD arrived on the scene to assist with the matter. Witnesses described the suspects vehicle as a grey sedan with tinted windows and no license plate. Neither Sakin nor the witnesses were able to get a description of the driver.

The suspect was last seen headed north towards Marysville. EPD notified Marysville Police to be on the lookout for the suspects vehicle. The police also believe that it is possible that the driver is unaware that they struck a pedestrian. However, Carol Crane, a construction worker that was working traffic control on the corner witnessed the accident and shared that the driver stopped after the incident and then took off. Crane then proceeded to dial 9-1-1 and check on Sakin.