The Representative of Washington's 2nd Congressional District Met With Members Of ASB And President Willis To Go Over Issues Students Face. 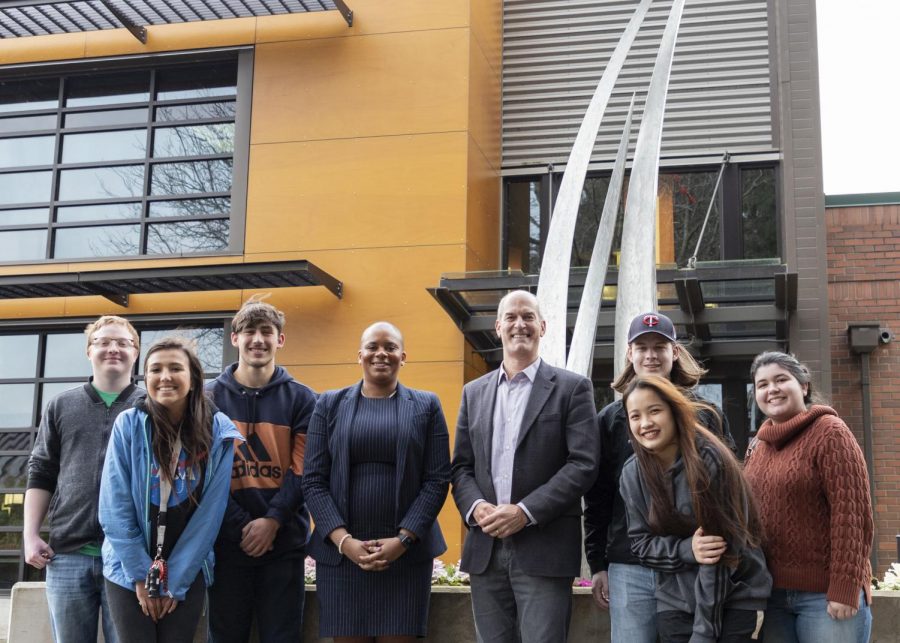 Congressman Rick Larsen (Middle) stands next to President Willis (Left) and members of ASB in front of the Feather Star outside of the Parks Student Union after meeting to discuss Open Educational Resources, textbook prices and food insecurity on Tuesday Jan. 21.

Congressman Rick Larsen visited Everett Community College today to speak with the student government, as well as President Daria Willis, regarding issues that students face. Topics included everything from food insecurity among college students to the cost of textbooks.

Madi Gilbert, the Associated Student Body Vice President of Student Engagement, brought up the issue of food insecurity among college students saying: “40 to 60 people a week use the food pantry alone.” The    EvCC Food Pantry, located in WHH Room 290, offers non-perishable foods as well as kitchen utensils, school supplies and hygiene products to all students and employees. Congressman Larsen addressed the issue saying he would love to follow up and brainstorm ways to help the school with outreach.

Another topic brought up during the meeting was the Signing is Language Act, which was introduced by Congressman Larsen in December of last year. The bill, according to Larsen, would “treat American Sign Language as an English as a Second Language.” This bill would designate people whose native language is ASL as “English learner” and include them in “a state to determine the amount of federal funds allotted to a state for English language programs.” The bill has received some pushback due to the fact that English as a Second Language (ESL) typically focuses on foreign languages. Congressman Larsen describes his method for dealing with pushback as “turning that prism a little bit to help people look at things a little bit differently.”

Congressman Larsen also sympathized with students’ concerns over steep textbook costs. “It’s not just the hardbacks but also the electronic textbooks… they found a way to charge you even more. There’s no recycling or reuse and they take advantage of that,” he said.

When someone mentioned that professors sometimes require students to buy books that they only read a chapter of, Congressman Larsen added: “I can speculate that they put the cost on you instead of getting permission to just copy the one chapter which would come out of the pocket of the professor.”

Talk of textbooks opened up a conversation about Open Educational Resources (OER), which is a free-to-use digital library of educational resources. “We had an exciting meeting with Apple last week and they do a really cool OER setup for faculty,” said President Willis. “We’re looking at possibly bringing an Apple store on campus.” President Willis went further by explaining that by adding an Apple store on campus there will be a foundation of support for our student learning environment. She also believes that Apple can help build the OER courses for EvCC.

Congressman Larsen ended the meeting by briefly speaking on the current presidential administration and how it has been problematic in regard to public education. “This administration I don’t have a lot of love for, or frankly respect for. They’re trying to tear down a lot of the good infrastructure including the educational infrastructure that we’ve built up. And they’re doing it for an illogical reason, not because it’s not working… no, they just look at it and say ‘Government is involved, we need to get rid of it.’ I won’t stand for that.”

If you are trying to get in contact with Congressman Larsen he cautions against social media. “Twitter is a really bad way to communicate,” he says. Social media can be hard to get a point across, especially with a 280 character limit. If you really want to get your voice heard, do it the old-fashioned way, send a letter in the mail. “When you write a letter, write it in crayon, because it will stand out. I guarantee you we will notice it.”