Exploring the Clipper Archives From Seasons Past 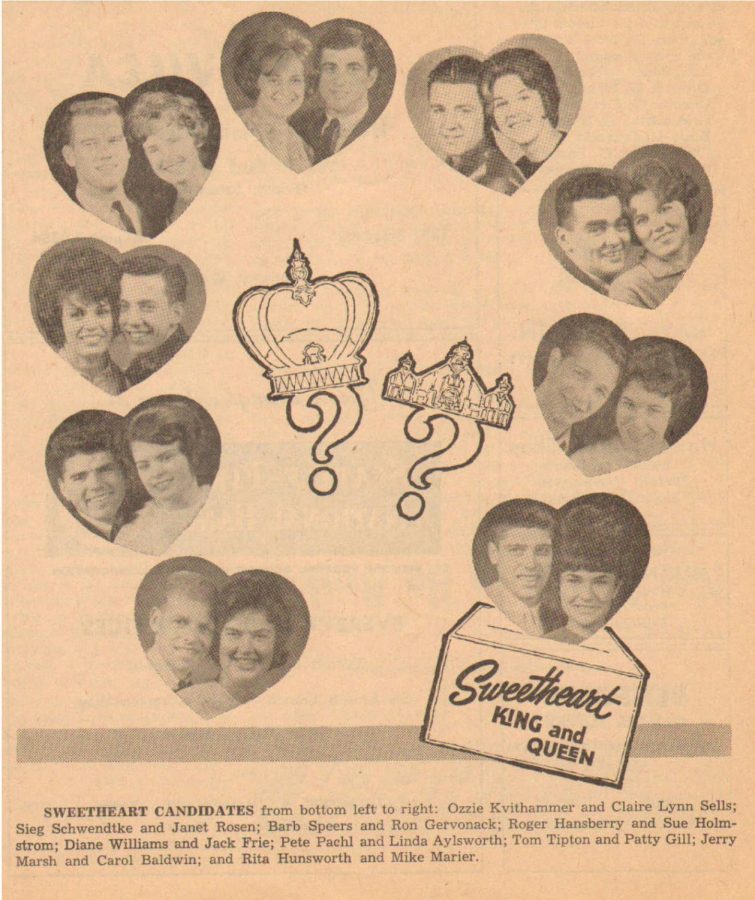 Candidates for the Sweetheart Dance King and Queen of (EvCC) in February of 1963.

The new year always sparks resolutions and change in habits for some people. Sometimes the change is unexpected, in the first few weeks students and instructors have already got some extra time to work on themselves with schools being closed for snow. This means it’s time to do a few last minute push-ups and learn about some EvCC history from The Clipper archives.

Every January the questions begin to circulate: How was your winter break? What are your plans for this year? Do you think it will snow? Some students wait in anticipation, hoping they’ll get the message from EvCC campus alerts notifying everyone campus is closed.

“Cars are being dragged down by the snow. Some schools and businesses are being temporarily closed down,” continues the Jan. 31, 1969 article. “The Winter enthusiasts are taking advantage of the frosty situation. Those that can make it, hit the slopes regularly. The ski freaks can hardly wait to plow through the deep powder, even though a buried Volkswagen awaits them at the bottom.”

Great advice, given the Farmer’s Almanac is one of the few books that have weather forecasts printed in case the weather man can’t make it to the station!

Before EvCC became a community college, it was Everett Junior College (EJC). EJC held a Valentine’s Day dance called the Sweetheart Dance, right before Valentine’s Day. Each dance had a theme and there was a King and Queen elected by the students. The dance was covered over four consecutive editions of The Clipper in 1963.

“‘Moonlight and Roses’ will be the theme for this year’s ‘Sweetheart’ Dance to be held in the campus lounge Feb. 9th. King and Queen candidates for the event will begin campaigning … ” starts The Clipper from Jan 25, 1963.

“Election sign-ups are now complete and the campaigning for this year’s Sweetheart Elections are coming to a climax. All students of EJC are qualified to vote for the couple of their choice this Monday, Feb. 1 … ” continues Feb. 1, 1963 edition of The Clipper.

All students were eligible to vote for their favorite couple, voting was open from the first to the fourth, and would be announced at the Sweetheart Dance.

“One hundred thirty-nine couples were present to witness the coronation of Ron Gervonack and Barbara Speers as King and Queen of Hearts at EJC’s annual Sweetheart Dance Saturday, Feb. 9, in the student lounge,” concludes The Clipper from Feb. 15, 1963.

Although EvCC won’t be holding a Valentine’s Day Dance, Silvertips Tickets will be sold for $10 in February, hosted by the Supporting Employee Engagement Committee. To get tickets, check the February campus calendar.

George Washington was born on February 11, 1731, but 20 years later the world changed from the Julian calendar to the Gregorian calendar, moving Washington’s birthday to February 22, 1732.

On the 130th anniversary of Washington’s birth in 1862, the reading of Washington’s Farewell Address happened for the first time and became an annual event for the Senate which is still observed to this day.

Washington’s Birthday became a legal holiday in 1879, when Congress added Feb. 22 to the list of federal holidays.

In 1968, Congress passed The Uniform Monday Holiday Act, which puts all federal holidays on Mondays to create more three day weekends and therefore causes holidays to be less disruptive to the workweek.

This change to the third Monday in February means that President’s Day will never fall on February 22, therefore the holiday is never on Washington’s actual birth-date.

President’s Day falls on February 17th this year and campus will be closed that day. Check the Campus Calendar for more details.

Click on the gallery below to view archive excerpts featured in this article and more.