Clipper Rewind: Stories From the Past

As a Publication That Has Been Around for 76 Years, There Are Many Stories That Deserve to Be Shared Again : Here Are a Few of Them 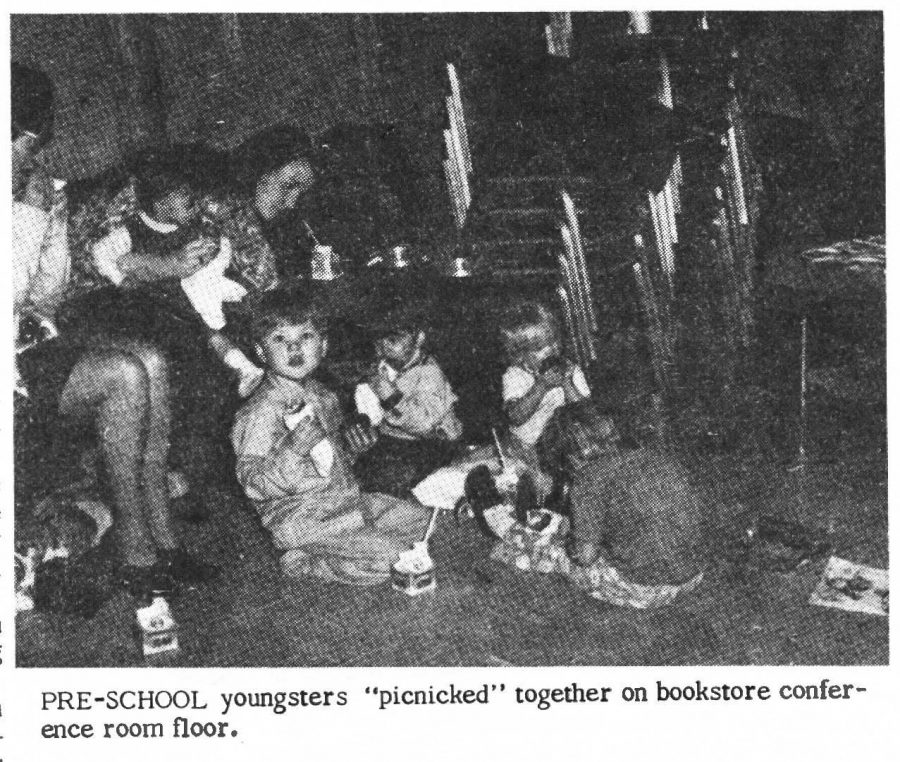 Pre-schoolers were also invited to the 1970 Christmas party, where mothers watched over them while they picnicked and enjoyed the festivities.

Stories are an important part of any gathering. For instance, when everyone is together, celebrating the new year, what are you going to talk about while waiting for midnight? Thanks to EvCC’s Clipper archives, here are three stories worth brushing the dust off of.

Christmas is a Holiday celebrated by millions every year. With holiday spirit, EvCC had a Christmas party in 1970 which included ice carvings and music. The Clipper covered the festivities and got all of the exciting details. Here’s the Dec. 11 1970 coverage of the event:

“YOUNGSTERS SAW Santa in bookstore conference room, but, suspended from the ceiling as he was, there was no climbing into his lap.” Says Willie Moberg, student author of the original 1970 article. Pre-schoolers and college students enjoyed the festivities alike. “The First 21st Street Vaseline Blues Grease and Jug Band assisted by the Freak Groper Chorus, was perhaps one of the most popular happenings at the festival.” Says the article. “Students spread ice pieces to form an infinity symbol on the grass between the TUB (Trojan Union Building: now Parks) and the Bookstore Conference Center…the festival was a success and went smoothly for everyone except for one student: ‘Where on earth is the typewriter,’ questioned Associated Women Student Regina McCune as she prepared to sit at her office desk ‘…It’s not that I’m concerned that it went to the Freestor (another club), I just wished I could have used it for a few minutes before it went!”

While Christmas parties aren’t held on EvCC Campus anymore, there are still many fun events held during the end of winter quarter. The Art Club and Student LIFE hold several events that are open to all to enjoy and are a bit more organized than this seemingly wild party! To learn about some of these events check the Campus Calendar at http://www.everettcc.edu/calendar/month/2019-12.

Washington state’s Puget Sound Region is known for its Native-American history and museums that showcase their past. In January of 1988, one of the largest Native-Amercan villages was excavated by a former EvCC student, and The Clipper wrote a full page article on the matter.

“Current excavation of an Everett historical site thought to be the Hebolb (now Hibulb) – the ancient and principle winter village of the Snohomish Indian Tribe – is due in part to the work of former Everett Community College student John Mattson.” Starts Chris Hudyma, student author of the original 1988 article. “No one before Mattson ever tried to protect the Indian site which may be up to 11,000 years old.” According to the article, John Mattson had believed the site was there since eighth grade. “In ‘74 they found enough evidence to think the area was a sufficient find but the commitment wasn’t there; no government agency or private company wanted to spend the money,” explained Bob Overstreet, one of the Everett city council members who recommended the site be tested.

23 years later, the Tulalip Hibulb Center opened and now displays some of the 930 artifacts recovered from the area near current Legion Memorial Park. Today there are several signs on display at Legion Memorial Park informing park-goers of the historical Native American village.

To some, Martin Luther King Jr. is one of the most important people in American History. To honor and celebrate his works, America views his birthday as an important federal holiday.

Although right now it’s too early to know what it may be this year, EvCC usually hosts one or many events to celebrate Martin Luther King Jr. Day. Check the EvCC Campus Calendar for updates on this http://www.everettcc.edu/calendar/month/2020-01.

Check out the slideshow below for a small slideshow of photos from Clipper’s past.