Get Ready for Winter Storms 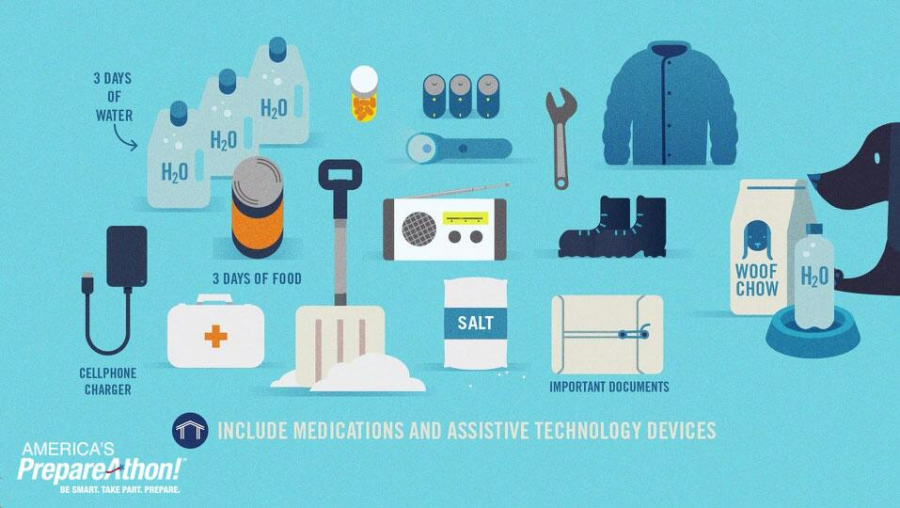 Snowflakes softly dance down from the sky, landing on rooftops, trees, grass or the tip of your nose. The first snowfall can bring feelings of excitement or anticipation. A snow day may invoke joy in the hearts of EvCC students, but it is important to think about personal safety. Are you prepared for winter weather?

In a survey of 40 EvCC students, 55% felt ready to handle winter weather and 56% were equipped with a winter coat, boots, snow gloves and a hat. Student Qurat Ain knows the dangers of the harsh cold weather after she was treated recently by her doctor for minor frostbite on her left foot. This is Ain’s first winter in Washington and she purchased winter boots as advised by her doctor after the incident.

The Federal Emergency Management Agency (FEMA) recommends individuals to take steps to prepare ahead of weather, including stocking at least three days of supplies in both your car and home in case you become stranded.

Student Brendan Stillwell knows the importance of preparing for both snow and power outages. His log home is on the peninsula and winters are very cold. “Last year we ran out of gas during Christmas week and the supplier was on vacation,” Stillwell recalled.

Luckily, Stillwell had power and was able to use space heaters, along with wearing extra clothing to keep warm. For others that rely on electricity for heat and cooking, a power outage can become crippling.

During and even after a snowstorm, the weight of snow can break tree limbs and damage power lines. Roads may be blocked by fallen trees and live wires broken by falling branches.

Snohomish County Public Utility District (PUD) prioritizes power restoration based on location and severity, choosing to repair the main power lines that connect to hospitals, schools and major roads. It may take days of power loss before emergency crews are able to restore power to your home. Never attempt to move downed lines yourself.

Washington State Department of Transportation (WSDOT) is committed to treating as many icy roads as possible, but it is important to have at least traction tires on your vehicle. “They de-ice the main road near the highway, but not my road,” Stillwell said.

One car accident involving ice was reported at EvCC last December according to EvCC Campus Safety, Security, and Emergency Management. The incident is believed to have happened at EvCC’s Corporate and Continuing Education Center in south Everett. No other incidents were found on record between December 2018 – February 2019.

Regarding snow closure, “one of the most important steps students can take is to sign up for emergency text messages from EvCC at EverettCC.edu/Emergency,” Director of Public Relations for EvCC, Katherine Schiffner stated. “If there’s bad weather or an emergency, that’s one of the ways we’ll let you know what’s happening. Anyone can sign up for notifications, including parents and spouses.”

EvCC aims to communicate students of a snow closure by 5 a.m. for day classes and 4 p.m. for evening classes. “If the college is open, but students are unable to safely make it to class due to adverse weather conditions, they should contact their instructors,” Schiffner said.

For details on how to sign up for emergency alerts, go to https://www.everettcc.edu/emergency

For more information on preparing for an emergency, go to https://www.ready.gov/