"Time Punks", A Play Written by Clayton Weller, and Directed by Beth Peterson, Will Be Premiering Dec. 5. 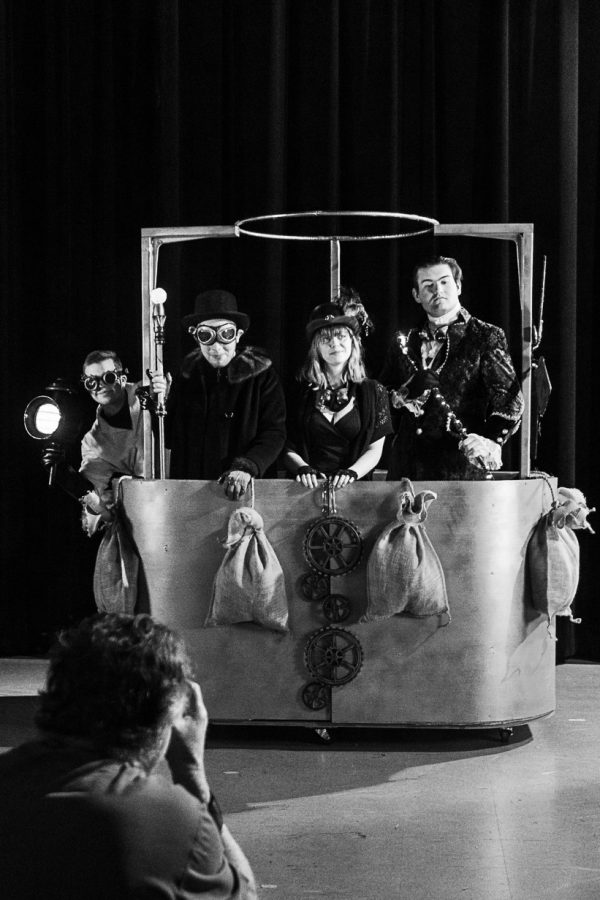 Actors pose for photos in character as various time-travelers. "Time Punks" is a play written by Clayton Weller and directed by Beth Peterson. It will be performed at EvCC Dec 5-8 in Baker 120.

The EvCC theatre program will soon be presenting “Time Punks,” a play about a seemingly pleasant group of time travelers that come to the city of Everett. There will be pirates, cowboys, and a serial killer on campus, and they will all be here to put on a show.

“Time Punks,” will be showing in Baker 120, Dec. 5-8. Showings begin at 7:30 p.m., except the Sunday show, which begins at 2 p.m. Admission is free, but donations are welcome. “Time Punks” was written by Clayton Weller, and directed by Beth Peterson, the EvCC Drama instructor.

Isaiah Valera, one of the cast members, described the upcoming play as, “fun, wacky and unexpected.” Cecilia Jacobson-Ross, also part of the cast, said audiences can expect a show, “like nothing they’ve ever seen.”

Weller has written two other play for the EvCC theater program. “Stage Fright” in 2017, about a haunted play that kills off the actors if they don’t hit their marks and play their parts. And “Murder Town,” in 2018, about a picture perfect American town in the 1950s where everyone is secretly a murderer, except the one person trying to get out of town.

To write the EvCC plays, Weller starts with a group interview with the whole cast, to figure out what kind of story they want to present. Weller also uses one-on-one interviews to help flesh out the individual roles. Weller hopes to give the EvCC students a chance to expand their acting abilities, by giving them the chance to play roles they have not tried before.

In the past, after the interviews, Weller took about five weeks to write the plays. This quarter he only had three weeks. “I was happy I had the two prior years as training,” said Weller. Because of the shorter time to write the play, Weller decided to use time travel as a part of the play, because it gave him more freedom to move the story around. “If people came last year, it will be very different,” said Weller, “but if they liked [last year], it will be exactly the same.”